My analysis begins by setting a query in Recorded Future on the Keystone Pipeline. Next, I dove into specific sources and articles, filtering based on popularity, predictions, and frequency of citation. With the larger data set and the specific subsets just listed, I listed the various key players according to the Network, mostly to sensitize my reading and synthesis. Then I analyzed Momentum to track where the story shifted and focused on those points for sentiment analysis. Finally, for each inflection point, I zoomed in on a set of stories to understand what happened, in what order, and why it was reflected on positively and/or negatively.

Mainly, questions centered around what happened with the pipeline proposal, why it was (eventually) rejected, what will happen next — and by whom, and what are the key predictive indicators. As for the latter, I tracked any forward-looking events mentioned in articles, as well as possible alternative outcomes mentioned by the various stakeholders. Also, I changed the parameters for the query to focus on 2012. Lastly, I compiled the analysis below.

TransCanada plans to extend its Keystone Pipeline (operational from June 2010) from the “tar sands” of Canada’s Alberta province to refineries in Texas on the Gulf Coast.  The $7 billion Keystone Gulf Coast Expansion (Keystone XL) would be completed in two phases, which pass through Nebraska, Montana, South Dakota, Oklahoma, Kansas, and end in Texas. If finished, the extension would increase the United States’ oil supply by half the amount of annual imports.

Debate centers around the cost, value, reliability, and environmental impact of the pipeline. In addition to TransCanada, proponents of the projects — many Republican politicians, construction companies, labor unions, and some (Canadian) government officials — argue that the pipeline will create jobs and decrease the US’ reliance on foreign sources of oil. Political and environmental opposition abounds, particularly as covered by the blog of the National Resources Defense Council (NRDC). Environmental nongovernmental organizations, landowners, Democratic politicians, and even some (American) celebrities express concern over TransCanada’s safety record and the possibility of leakage, as well as concern about climate change and greenhouse gas emissions, a result of oil sands production. On job creation, a report from the Global Labor Institute challenged the company’s estimate, which TransCanada later revised. Finally, potential pipeline construction prompted worry about local environmental impacts, particularly in Nebraska, in which the pipeline could effect the Sand Hills ecosystem or contaminate the Ogallala Aquifier, a major source for irrigation and drinking water.

“In the end, neither side can predict with confidence what Obama will decide.” -Washington Post, November 5, 2011 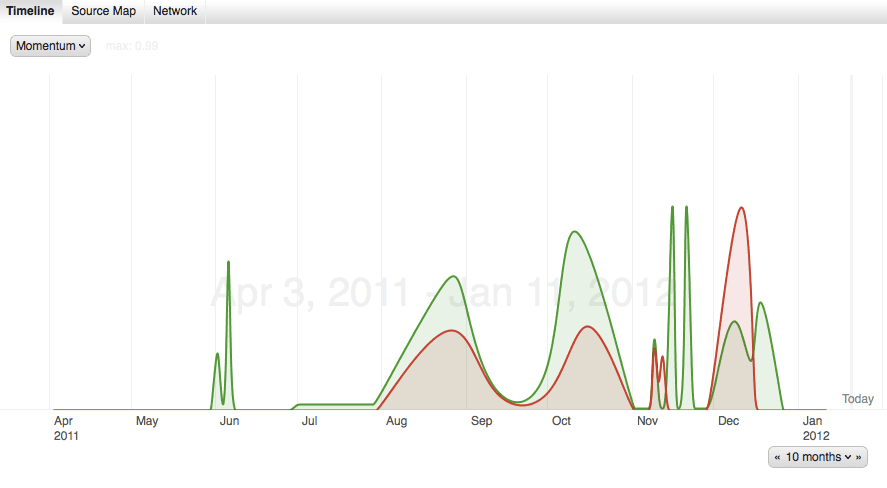 In early June 2011, the U.S. Department of Transportation ordered the shutdown of TransCanada’s Keystone pipeline, as investigations revealed safety concerns at pump stations. At the same time, the U.S. State Department was completing public consultations about the Keystone XL phase of the project. There is generally positive sentiment around the announcement, likely because it showed U.S. commitment to a proactive approach to preventing possible spills.

In August, the State Department issued its own environmental impact assessment, concluding that the pipeline will not cause significant damage to the environment as long as TransCanada complies with U.S. law. The reaction to this news was noticeably more positive than negative, but that could be as a result of progress toward a decision, not necessarily sentiment about the project.

In October, documents were released (by Mother Jones as a result of a FOIA request by Friends of the Earth) that cast doubt on the impartiality of the State Department’s assessment. Later, the State Department opened an investigation of the process around issuing a permit for the pipeline. Additionally, environmental advocacy organizations sued to stop the development of the pipeline. This development showed positive sentiment, perhaps due to transparency in government decision-making. A second development, TransCanada’s announcement that it could lose up to $1 million per day with a delay was met with negative sentiment, an indicator of disconnect between the company’s statement and public opinion.

In early November, the U.S. State Department announced that it was considering an alternate route for the pipeline, which represented the highest peak in momentum around any event related to the pipeline in 2011. As the reported possibility of the alternative route seemed to be more likely, the State Department announced that it would delay its decision until 2013, which was accompanied by a large spike in positive sentiment. An analyst with MF Global Washington Research Group wrote in a research note that the fate of the pipeline has grown “less secure” and “the odds favour approval, but an extended delay is looking more and more possible.” Given the increased attention and political importance of the decision, President Obama become more personally involved with the decision.

In mid-December, the Republican-led House passed a proposal to require a decision within 60 days. President Obama threatened to veto the bill if it reached his desk, however, the State Department warned that a hasty decision would decrease the project’s chances for approval (in particular, because a recently-passed Nebraska law requires an environmental review that could last from 6 to 9 months). These developments saw an interesting double-peaked positive sentiment curve, with a sizable peak in negative sentiment situated between the two positive peaks — underlying policy uncertainty about whether the Republicans would be able to successfully attach an expedited executive review to legislation on a payroll tax cut. 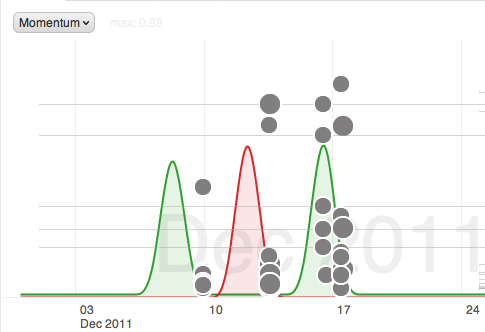 In mid-January, President Obama announced that he was rejecting the permit for the pipeline, based on insufficient time to evaluate the project, not on the merits of the project itself. Republicans continued to pressure the President to make a decision, highlighting a divide among two traditionally Democratic demographics: labor unions and environmentalists. As a result of the President’s decision, environmental groups celebrated the victory and TransCanada (and the Canadian government) focused on alternative pathways forward on the project.

Following are possible action from various groups, as well as indicators of what to watch in the coming weeks and months:

Corporate – announcements about next steps and tactical shifts:

Whether or not the President’s delay on a decision will have a long-term impact will depend, oddly, on future projects that come across his desk (or if they make it that far); given the election and political dynamics, the next decision point will establish a policy precedent for preventing such proposals from coming to fruition.

Munish Walther-Puri is a guest blogger for Recorded Future who specializes in geopolitical intelligence analysis. Follow Munish on LinkedIn.