Greece, Syriza, and the Eurozone Crisis

More than the future of Greece will be in the balance when its people go to the polls again for legislative elections on June 17; the survival of the eurozone and the economic well being of Europe may be at stake. Two weeks ago, the previously marginalized leftist party Syriza  (Coalition of the Radical Left), which is staunchly against austerity measures proposed to rescue Greece from its financial crisis, surprisingly won a significant share of the vote and could soon find itself at the head of a new government.

How could a Syriza victory affect Greece and the eurozone? Briefly, the standing offer to bailout Greece from its debts is contingent upon the enactment of significant spending cuts. Such action is opposed by Syriza’s leader Alexis Tsipras. If Syriza wins enough seats to form a government and Tsipras follows through on his political promises, Greece would receive no further bailout loans. This would likely lead to a cascade of adverse economic effects on the country’s banks and the region’s financial stability.

Having provided that background, let’s move directly into an examination of the global media’s reaction to recent events. We’ll start with a view of the news sentiment derived by Recorded Future on mentions of Syriza during May and forecast events for June (if you’re new to Recorded Future, see how we extract references to the future here):

What we find in the above timeline, which displays the aggregate trends in the tone of language used in reports by online media outlets on Syriza, are several distinct inflection points in sentiment around recent and near future events:

Given the group’s sudden rise, one also wonders about the history of and past commentary by its now crucial head figure, Alexis Tsipras. Largely fringe until the May elections, the stance taken by Tsipras since his ascendance into the global media spotlight turns out to be nothing new. The timeline below shows a selection of his statements from the last two years, all of which were reported prior to the May 7 elections. -Essentially, we’re looking back at the Tsipras prior to his recent ascendance, and as you can see, his rejection of austerity measures and government spending cuts has long been publicly vocalized. 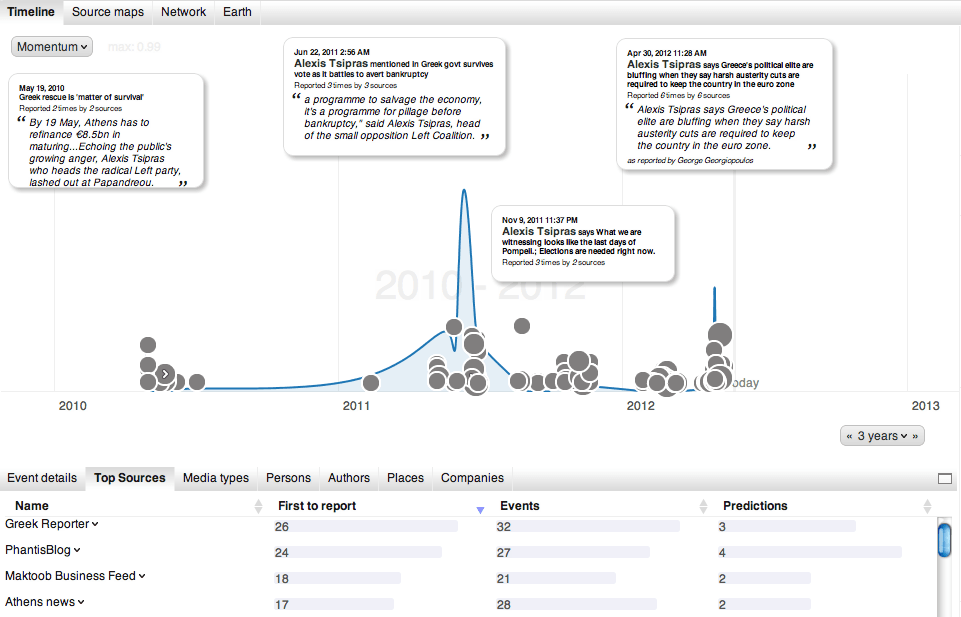 Given Tsipras’ clear focus on domestic political policy shown in the above timeline, it’s interesting to see how his communication and political connections shifted during the last thirty days since he’s been thrust into the global media and political spotlight.

The network graph below charts relationships to Tsipras mentioned in the media, and we find attention from heads of state as well as connections immediately made in public with like-minded French political figures Jean-Luc Melanchon, co-President of the Left Party, and Pierre Laurent, head of the French Communist Party. 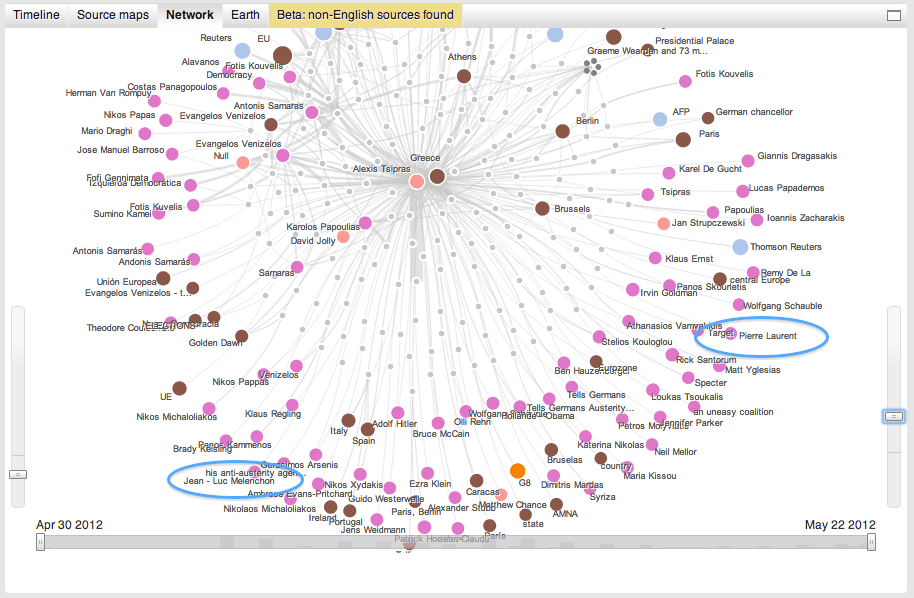 Opinions on the Eurozone and Alternative Solutions

It’s worth noting that a fair share of analysts believe Greece won’t make it as far as its scheduled elections. The below timeline shows an aggregation of quotations and statements mentioning the eurozone from the last two weeks. Some of the commentary comes from analysts or journalists while other statements come directly from politicians such as seen in the highlighted quotation from German Chancellor Angela Merkel. 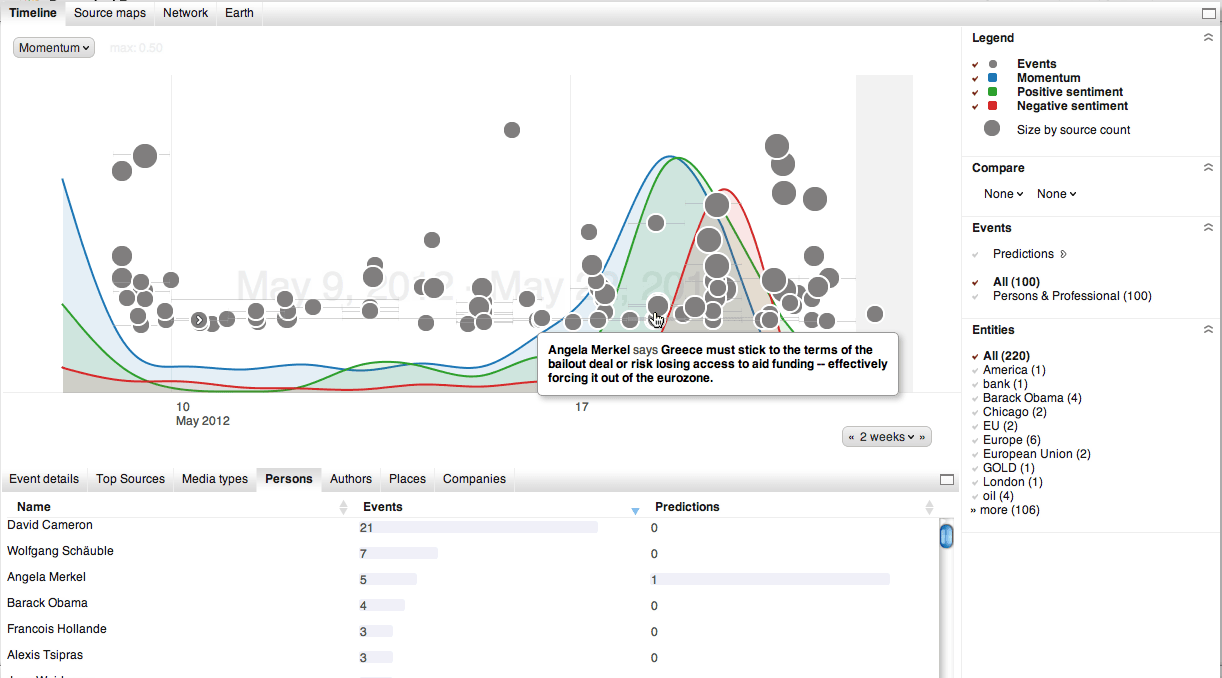 Try exploring some of those events where sentiment is particularly high, or select the different individuals shown in the table beneath the timeline. Doing so provides an easy way to gain insight into the contrasting stances of world leaders with very different stakes in the game.

One last area to investigate is media coverage and public reaction to different proposed economic solutions. One such idea: the issuance of eurobonds, which would share debt amongst all countries in the eurozone.

While the viability and effectiveness of eurobonds has been debated on and off over the last twelve months, the issue has received renewed attention in the wake of Francois Hollande being elected France’s president. Hollande supports the issuance of eurobonds, and as seen below, the most recent reactions to issuance of such debt are clearly more positive than they’ve been since the summer of 2011: 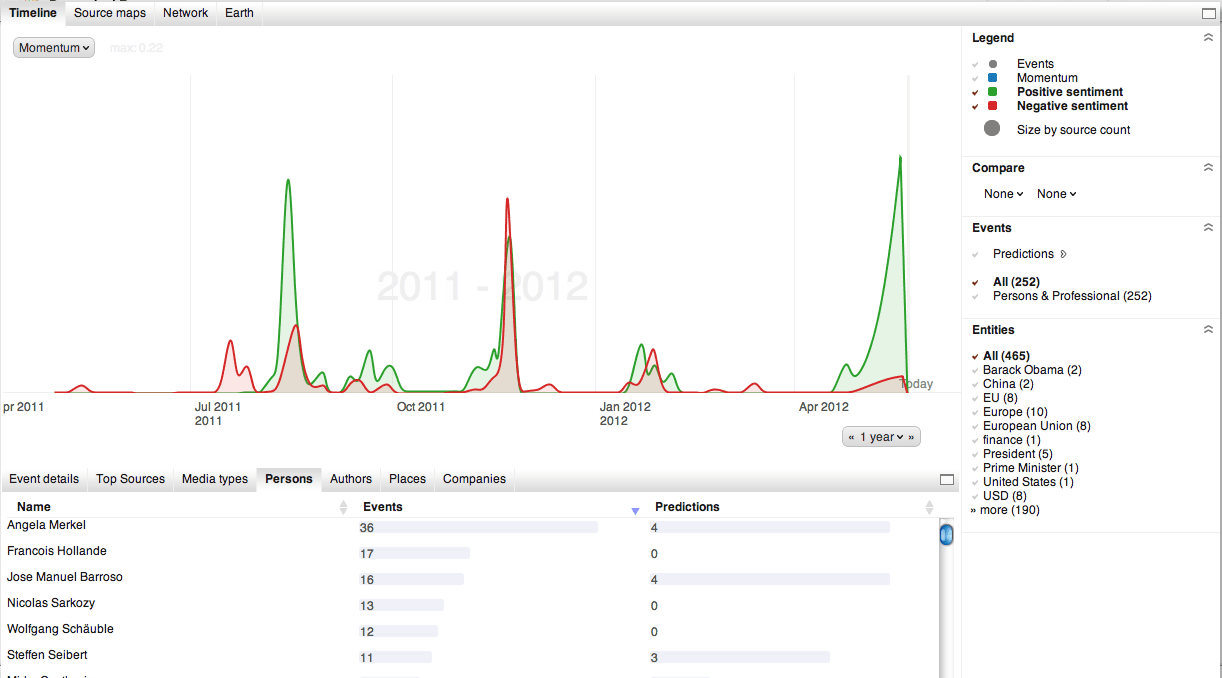 One thing that hasn’t changed? German Chancellor Angela Merkel’s resistance to the use of such an instrument. Her statements and those of German government spokespeople are prominent in each of the time periods where negative sentiment peaks.

While twists remain almost certain ahead of June 17, it’s valuable to understand media and political reactions on the fly in the context of past events and activity. In this short analysis, we’ve found Alexis Tsipras well prepared and practiced on the driving political issue at hand despite his youth relative to competitors. We’re able to follow, in real time, explicit predictions as well as the media tone around the impact of a Syriza victory. And we recognized that the idea of eurobonds, while not new, has received a considerably more favorable response in recent weeks.

Many of the views shown above are available as live, Recorded Future visualizations. We encourage you to try them out, set up a few email alerts, and see what sort of trends and predictive signals you’re able to identify!