In September 2020, Recorded Future clients received a report on activity linked to a user of the shared custom backdoors Winnti and ShadowPad. This activity targeted a Hong Kong university and airport. The infrastructure and malware used in these intrusions directly overlap with previous reporting by ESET and NTT Group on Winnti Group activity. There are also numerous infrastructure and malware overlaps with activity recently reported by Avast, which described an installer backdoored with Cobalt Strike found on the official website of MonPass, a major certification authority (CA) in Mongolia. Both the ShadowPad and Winnti backdoors are shared across multiple Chinese activity groups. Winnti in particular has been historically used by both APT41/Barium and APT17 and is commonly associated with activity linked to multiple groups of loosely connected private contractors operating on behalf of China’s Ministry of State Security (MSS). In this case, Insikt Group tracks the cluster of activity described in this and our previous report using the temporary name Threat Activity Group 22 (TAG-22), while we note some historical overlap with activity clustered as APT41 and Barium by FireEye and Microsoft, respectively.

Victimology and Use of Compromised GlassFish Infrastructure

In particular, the targeting of the ITRI is notable due to its role as a technology research and development institution that has set up and incubated multiple Taiwanese technology firms. According to the ITRI’s website, the organization is particularly focused on research and development projects related to smart living, quality health, sustainable environment, and technology, many of which map to development priorities under China’s 14th 5-year plan, previously highlighted by Insikt Group as likely areas of future Chinese economic espionage efforts. In recent years, Chinese groups have targeted multiple organizations across Taiwan’s semiconductor industry to obtain source code, software development kits, and chip designs.

While we believe these 4 organizations were likely the intended end targets of TAG-22 intrusion activity, we also identified several suspected compromised GlassFish Servers communicating with TAG-22 C2 infrastructure. This is in line with recent NTT reporting, which identified the group exploiting GlassFish Server software version 3.1.2 and below and using the compromised infrastructure to conduct onward intrusion activity, specifically scanning using the Acunetix scanner and deploying the Cobalt Strike offensive security tool (OST). Per NTT researchers, the group likely used this infrastructure in the early stages of intrusions before transitioning to dedicated infrastructure for controlling ShadowPad, Spyder, and Winnti implants. For its dedicated infrastructure, TAG-22 primarily used domains registered via Namecheap and Choopa (Vultr) virtual private servers (VPS) for hosting.

By querying the TAG-22 C2 domain vt.livehost[.]live in the Recorded Future Threat Intelligence Platform, we identified links to the Shadowpad and Spyder backdoors that combine Recorded Future C2 detections and passive DNS data.

This allows us to pivot and identify the TAG-22 IP address 139.180.141[.]227, which we have detected being used by the group for both Shadowpad and Spyder command and control. 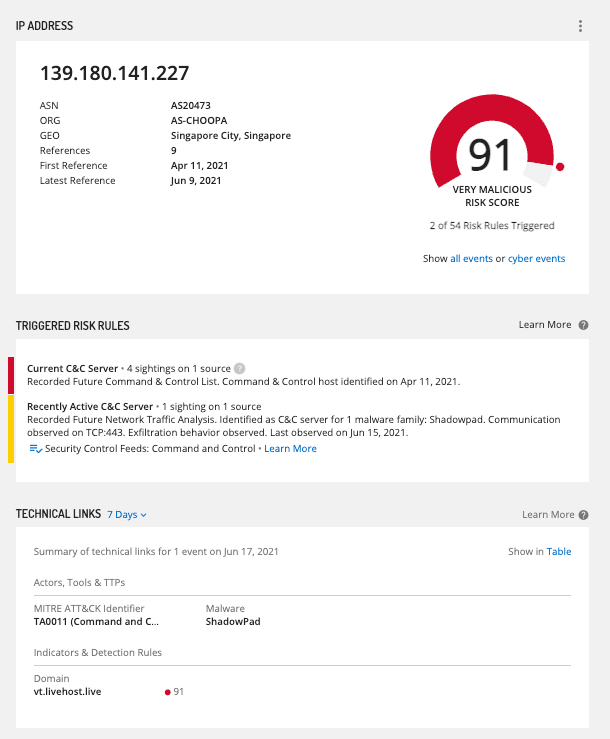 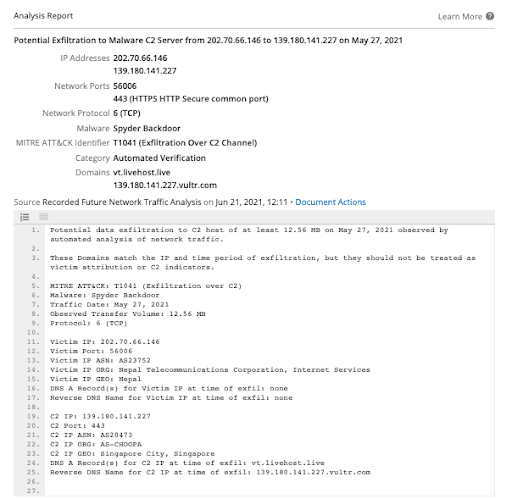 In addition to identifying additional related malicious infrastructure, using Network Traffic Analysis Events, we were also able to pinpoint specific victims of TAG-22 activity. The screenshot above shows an exfiltration event from the Nepal Telecom IP to the Shadowpad and Spyder backdoor C2 139.180.141[.]227, which hosted the domain vt.livehost[.]live at the time of exfiltration. While the victim IP address is assigned to Nepal Telecom, for telecommunication companies, this is often insufficient for attributing the true victim organization because the majority of infrastructure owned by those entities is leased or provided to its customers. In this case, we can use the new, proprietary VPN and Geographical Information extension alongside other enrichments to try to pinpoint the victim of this activity. 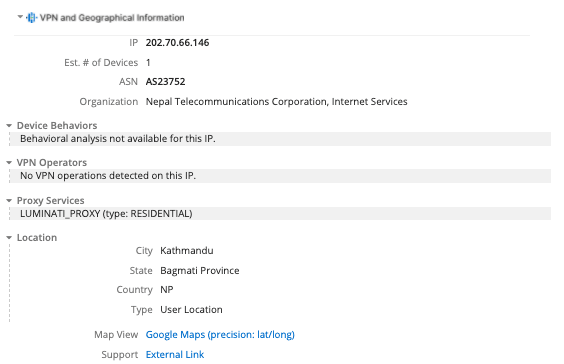 By clicking on the Google Maps view within the VPN and Geographical Information extension for this IP address, we can pinpoint a location and confirm that Nepal Telecom is likely the victim of this activity — the location directly points to Nepal Telecom’s head office in Kathmandu.

Through analyzing the identified TAG-22 operational infrastructure, we identified several Cobalt Strike samples likely used by the group to gain an initial foothold in the target environment. The group also used a custom Cobalt Strike loader the malware authors appear to have called Fishmaster based on a debugging string present within several samples:

The string “fish_master” was also present across others.

In each case, following execution, the user is shown a decoy document, such as the resume shown below for a likely Taiwanese national. In other instances, the group used malicious macros to drop the Fishmaster loader. As both sample lure documents are written in traditional Chinese characters and the CV features a Taiwanese university, and because the group has more widely targeted Taiwan, we believe that Taiwanese organizations were likely the targets for these particular lures. 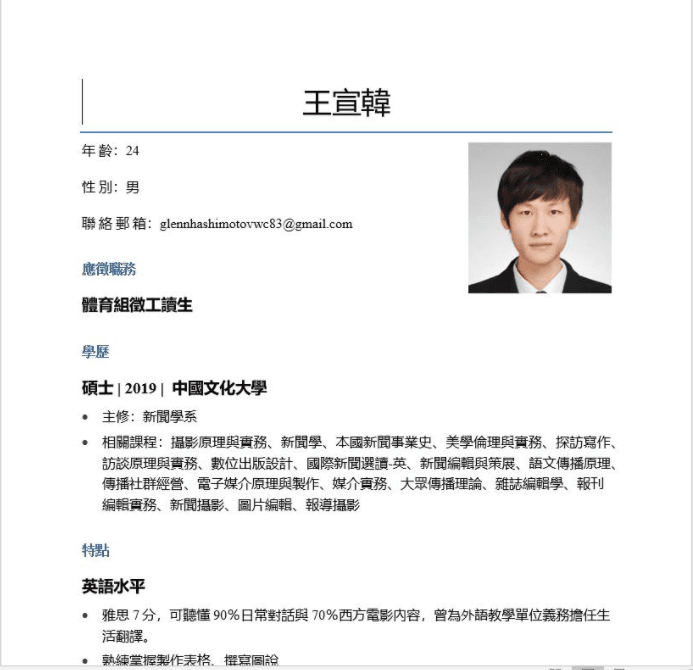 Many of the Cobalt Strike beacon payloads used by TAG-22 across this campaign were configured using the Backoff malleable C2 profile, which contains the following high level network traffic characteristics:

All of the configurations contain the watermark 305419896, which is associated with a cracked version of Cobalt Strike.

At this time, Insikt Group continues to track TAG-22 activity as an independent activity cluster that overlaps with the wider group defined as Winnti Group by ESET. TAG-22 uses shared custom backdoors likely unique to Chinese state-sponsored groups, including ShadowPad and Winnti, while also employing open-source or offensive security tools such as Cobalt Strike and Acunetix. TAG-22’s continued use of publicly reported infrastructure is indicative of a group experiencing a high degree of operational success despite a breadth of public reporting regarding its operations. Insikt Group has primarily identified TAG-22 operating within Asia. However, apart from this campaign, the group has a relatively broad targeting scope both geographically and by industry. This wider targeting scope, coupled with the use of the Winnti backdoor, is typical of several suspected MSS contractors, including APT17 and APT41.

For a full list of indicators of compromise, please refer to Insikt Group’s Github repository.