Recorded Future’s Insikt Group has discovered a large-scale, likely state-sponsored influence operation against the British Broadcasting Company (BBC) and the United Kingdom (UK). The campaign involves hundreds of websites and social media accounts and thousands of comments across state-affiliated news sources, fake news websites, and Chinese and Western social media platforms. China’s state-affiliated media and Communist Party of China (CCP) officials have recently increased their criticism of the UK and the BBC in response to a recent BBC report revealing that Beijing’s top propaganda outlets are incentivizing foreigners, called “stringers”, to create pro-China social media influence. To counter the BBC’s allegations, these propaganda accounts have taken to social media to criticize BBC’s journalistic integrity, accusing them of using an “underworld filter” or “gloom filter” (阴间滤镜) on photos and video of China to make the country look lifeless, dull, and sad to foreign audiences. The BBC adamantly denies these accusations.

There have been over 11,000 references of the Mandarin-language term for “gloom filter” across open sources in the past 6 months, with over half of them occurring in the last 30 days. English-language mentions of “BBC underworld filter” have also spiked over the past several weeks, totaling over 56,300 in 6 weeks. Since the “stringers” have started spreading Chinese propaganda, English-language references to the “gloom filter” have increased dramatically, as shown in Figure 1. We are confident that this uptick results from recent pro-China influencers amplifying the “gloom filter” theory.

Insikt Group has observed these influencers, or “stringers”, on various English and Mandarin-language sources defending China against accusations of human rights abuses, authoritarian control, and Western reporting on China that contains negative sentiment.

On July 19, 2021, China’s Ministry of Foreign Affairs spokesperson Zhao Lijian asserted across social media that BBC edited the color out of a photo of a popular British pro-China social media “influencer” named Jason Lightfoot, who also goes by the moniker “Living In China”. One post stated, “#GloomFilter comes again! It could be accounted as one of BBC's familiar supernatural skills, to turn a green and prosperous city into a grey desolation”. On his YouTube channel, which has over 157,000 followers, Lightfoot shared a before and after photo of himself from the July BBC report that he claims had a “gloom filter” applied to make China look dull and colorless in the background.

This claim is often accompanied by other criticisms of the BBC network and its reporters, accusing them of trying to make China look bad to the rest of the world through biased reporting and photo editing. This accusation was amplified across multiple English-language and Mandarin-language social media accounts and then shared by hundreds of PRC state-affiliated media, fringe media sites, and other pro-China “stringers” or influencers. Additionally, the so-called BBC “underworld filter” has been criticized in hundreds of videos throughout 2021 on popular video sites such as bilibili[.]com, CCTV, TikTok, and YouTube, with recent notable spikes in negative sentiment throughout July 2021.

China Attempts to Discredit the BBC and the UK

On December 10, 2020, BBC released a video titled “Covid-19: How everyday life has changed in Wuhan”, depicting how life for citizens of Wuhan, China, has changed since the outbreak of COVID-19 in late 2019. On January 18, 2021, the BBC also produced a documentary titled “COVID-19: The Road Back to Wuhan”, which documented how Wuhan has since recovered, socially and economically. Both of these videos were criticized by China’s top spokespersons, state-affiliated media, and subsequently China’s social media following, as being digitally altered as “a deliberate attempt to misguide viewers and discredit China”. By February 2021, the narrative had spread throughout all aspects of Chinese media: BBC is anti-China. The accusations are sourced only to “netizens” of China, with no evidence of the source for before and after photos represented in the media. Reports from state-affiliated media outlets such as Global Times state that an anonymous citizen made an observation, "Is it just me or are you using some kind of filter to make the colors in this video look old and give us a sense of the city looking poor?" The comment received hundreds of “likes” and sparked a large-scale social media campaign spreading the message of the “gloom filter”.

On February 10, 2021, China banned BBC World News from broadcasting within the country. China's National Radio and Television Administration (NRTA) based the decision on internal findings that BBC World News reports about China "seriously violated" broadcast guidelines, including "the requirement that news should be truthful and fair" and not "harm China's national interests". However, BBC World News is largely unavailable to the common Chinese audience, appearing only in international hotels and some diplomatic compounds. British Foreign Secretary Dominic Raab responded publicly to the move, calling it “an unacceptable curtailing of media freedom”, noting that “China has some of the most severe restrictions on media & internet freedoms across the globe, & this latest step will only damage China’s reputation in the eyes of the world”. The United States (US) State Department also commented on the situation, calling it part of a wider campaign to suppress free media in China. 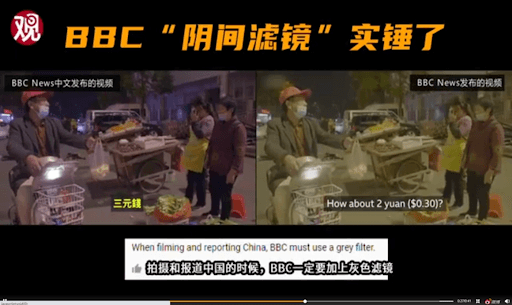 Throughout June and July 2021, China’s foreign ministry spokesperson Hua Chunying shared images on social media that criticize the US, the UK, and Canada for alleged human rights abuses of the past. The image (Figure 3), created by Global Times and sourced from “media reports”, shows the name of the nation on the top, accompanied by the corresponding flag, and listed statistics of “discrimination of ethnic groups” (allegedly conducted by Clear View Research), “incompetence in handling COVID-19”, and “violent treatment of civilians”. The image was accompanied by a strong message shaming Western nations for interfering in China’s affairs, almost certainly referring to the implementation of sanctions on China for human rights violations in Xinjiang: “The #US, #Canada &the #UK should feel ashamed for their blind eyes to their own shocking #humanrights records and sheer lies &evil-purposed interference in China's internal affairs. Justice will prevail”. 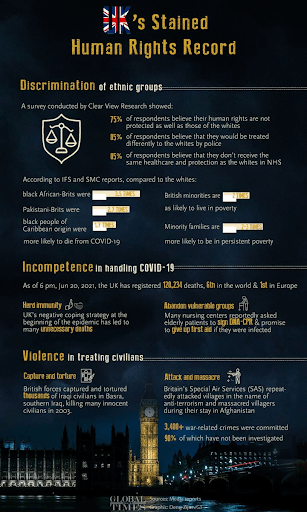 Hua Chunying’s original social media post received nearly 1,200 likes and 350 shares. The post was also shared by the account of the Chinese embassy in the UK, which received much less traction: 6 likes, 6 comments, and only 3 shares.

During a daily press conference on June 23, 2021, Zhao Lijian addressed the UK in a statement in response to criticism of Beijing’s handling of Uyghur Muslims in Xinjiang. In his statement, he deflects blame back on the UK: “The UK is by no means a ‘model student’ & has no authority to lecture others on human rights. It should earnestly reflect upon its own grave human rights violations instead of smearing China to divert attention & deflect responsibility”. The tweet received over 100 likes, 27 shares, and very few comments, indicating it did not get much traction in English-language social media. However, the theme is consistent with how China’s Ministry of Foreign Affairs is handling criticism at this time: deflecting blame and revisiting the past mistakes or perceived reputational weaknesses of its accusers.

Insikt Group judges with high confidence that this activity is a CCP-sponsored influence operation targeting the BBC and the UK government. The volume of activity paired with a clearly identifiable narrative, coordination across the Chinese state-sponsored media apparatus, use of both Mandarin and foreign-language content, use of dozens of fringe media outlets, and the campaign’s alignment with the CCP’s objectives create a clear picture of how the CCP is conducting large-scale information operations to counter criticism and censor foreign media. Similar recent campaigns, including against Canada and the US, have been observed by fellow disinformation researchers and further confirm the tactics, techniques, and procedures used in this particular campaign targeting the BBC and the UK.