This post was originally published at GamaGanda, a gaming industry analysis blog by Vlad Zotta. You can find the original post entitled “Analyzing Sony with Recorded Future” here, and many thanks to Vlad for allowing us to share on our blog.

There are just a few more days until Sony’s big announcement set for February 20th. I decided to have a quick look at Sony using Recorded Future, a tool I learned to love during the last few days. It clearly shows the company history for the desired period, so I have decided to look into the last three years. So, this is how it looks like. 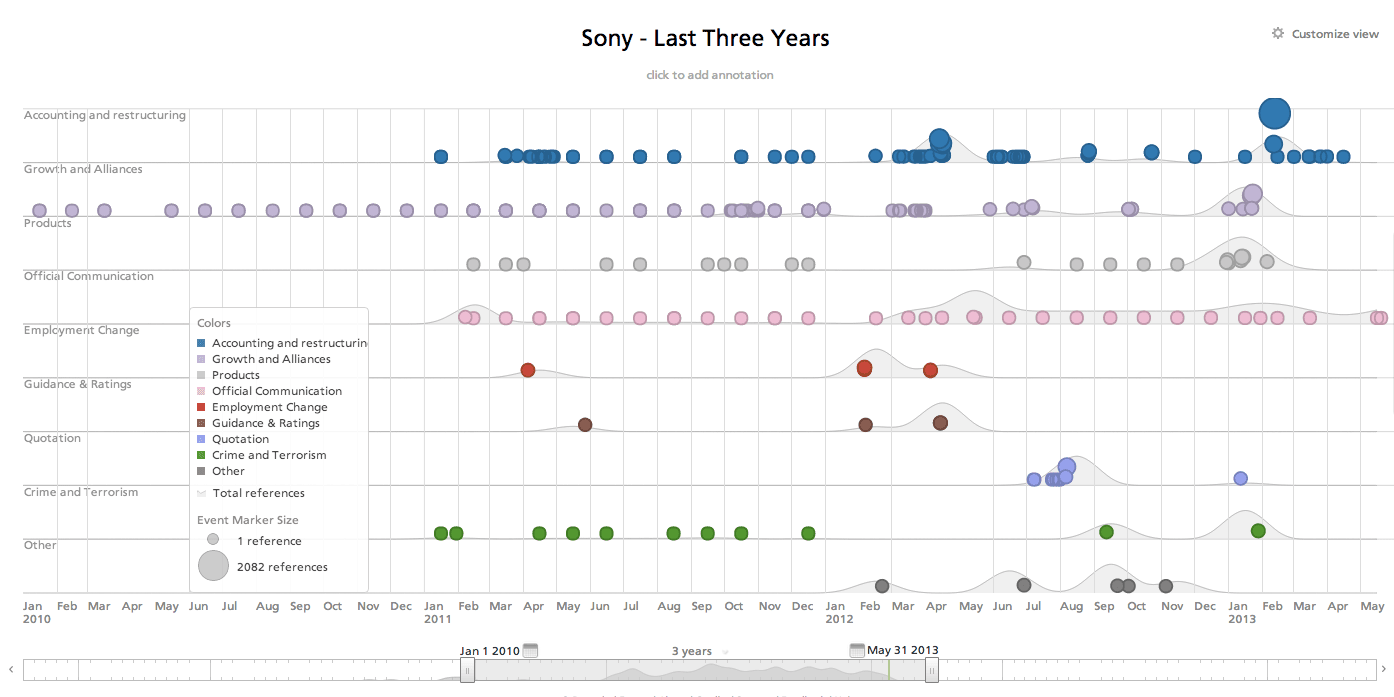 Starting with 2011 there were a lot of layoffs and the company was plagued by restructuring or force majeure events (the blue line). They have increased in intensity and this is never a good thing. This tells me that Sony has searched for its place on the market, acting without clear goals and reacting to competitor moves. On one hand, Kaz Hirai was talking about innovation during CES 2013, and on the other, we haven’t seen it yet.

Regarding their products (the grey line), the first set of bubbles represents PS Vita, while the second the Xperia line of smartphones. PS Vita never reached the level Sony intended, while being an incredible piece of hardware. The Xperia smartphones are a different story though.

Last but not least, the pink line represents official communication activity. You can see it going up just before the Xperia smartphones and slowly decreasing right after that but they still have maintained a certain level of activity, just to keep the buzz going. It’s pretty obvious there’s something important coming soon and we all know what we expect. PlayStation 4! I can only hope this week’s announcement will live up to our expectations or else we risk seeing an increase on the blue line. We really don’t wish for it, while Sony really doesn’t need it.

So, in the end, my conclusion would be that Sony is now in a delicate position. They really need this announcement to have a big impact. Sony needs to win. Let’s see!

[Update, February 20] Additional commentary and analysis from Vlad in a follow up post comparing layoffs and patent filings between Sony, Microsoft, and Apple.

Again, you can find the original post at GamaGanda here, and we look forward to seeing more discussion about the future of the gaming industry from Vlad! You can also see lots more on the subject in Recorded Future via this report on next generation gaming consoles.