Yemen Heading for Disaster in 2010?

Al Qaeda's most recent failed attempt to destroy a Detroit bound aircraft on Christmas Day has led to increased interest in Yemen where it appears the would-be bomber linked with Al Qaeda before the attack. Yemen has increasingly been a hot-spot for violence and a new found haven for terrorism.

Recently the US and UK went so far as to close their embassies in Yemen based on terrorist threats. Many believe that as US and NATO forces increase pressure in Afghanistan forcing the areas along the Af-Pak border less comfortable for Al Qaeda and the Taliban, will they look to Yemen as a new headquarters and breeding ground. Critics claim US "efforts in Yemen are being constrained by a lack of in-house expertise and a fraught history with the countryâ€™s leader."

Clearly, Yemen is an area of increased interest and a potential hotbed for terrorism and crisis; and an area where we could use better insights. We looked into our index at Recorded Future to see what information we could learn about the future of Yemen and the results are interesting - to start with, Yemen is attracting al-Qaida:

When we look at the history of Yemen, we see recurring natural disasters in the region. It's obvious that Yemen is prone to repeat flooding, fierce storms, and drought.

An alternative way to view these results in Recorded Future is using our new timeline view (which is coming shortly). The continuous grey curve represent events where natural disasters occurred throughout the year (or were described in year terms), and the dots show specific incidents or time points when a natural disaster event occurred. 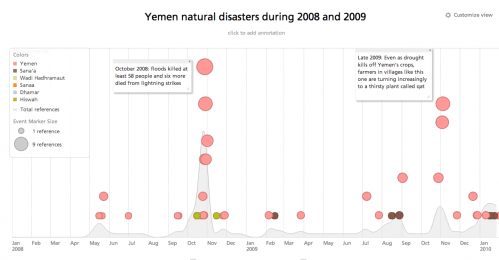 These extreme weather conditions no doubt have impact on their agricultural production as we see from the hits below. These events foretell of famine and food shortages coming in 2010:

**Abdul-Karim Al-Iryani** says _"the country could face famine as soon as next year, calling upon the international community to support Yemen."_

Former Prime Minister Abdul-Karim Al-Iryani has warned that the country could face famine as soon as next year, calling upon the international community.

Mansour Al-Houshabi: Decline in grain production, call to reduce wheat consumption (Local) Person He called last week for reducing the consumption of wheat. Humanitarian crisis looms in Yemen - Oxfam Country Humanitarian crisis looms in Yemen - Oxfam. - ...SANAA, (Reuters) - The international aid group Oxfam warned on Tuesday that Yemen could soon face a humanitarian crisis as a result of the escalation of fighting in August between government forces and.. Earlier this year we wrote about early warning sings of conflict. Many have argued that crop shortages and consequently famine are a red flag for unstable nation states. The rise in population combined with decreased grain production is particularly concerning: Yemen: Integrating culture into development strategy for reproductive health (Local) Country The population of Yemen now stands at 22.3 million, and is therefore expected to double by 2050. There's no shortage of speculation about Yemen's future based on these opinions: Yemen: We are on the verge of an Islamic Revival 2024... of the Islamic Caliphate and the role of youth Dear brothers and sister, I am speaking to you from Yemen at the moment and there are some similarities between Yemen and Pakistan, so when speaking about one, it is like speaking about the other.

Aid won't fix the crisis in Yemen (Opinion) Country's donors believe stabilizing President Salehs regime will thwart the devolution of Yemen into a failed state and an al Qaeda safe haven. - U.S. aid proposed for 2010 is at the highest levels in years.

This article from the Yemen Post seems to have strangely disappeared:

Yemen, Yahya Person Travel In March 2008, a Saudi terrorist financier admitted that al-Qaedas branch in Saudi Arabia was defeated and called on his remaining associates to flee to **Yemen**. An influx of insurgents returning from Iraq and an ongoing active recruitment process within Yemen have energized al-Qaedas domestic support base.

It's important to remember that Yemen is the poorest country in the Arab world as well as a haven for Islamic jihadists. The Pentagon is spending over $70 million this year to train and outfit Yemeni military, but that doesn't directly address the issues we've uncovered. Based on the information we've gathered we can see that Yemen will likely experience food shortages in and torrential floods in 2010. This combination of natural disasters, propensity for famine and malnutrition, and challenges with Islamic radicals and terrorists make it a top hot-spot for conflict in the future.

Interested in using Recorded Future's news analytics for your intelligence analysis? Learn more about how Recorded Future works or request a live demo of the service itself.