Editor’s Note: Recorded Future is working to bridge the gap between the theoretical and the practical by providing step-by-step guides to using its platform. This blog includes steps for recreating our recent report, “Microsoft Targeted by 8 of 10 Top Vulnerabilities in 2018,” published on March 19, 2018.

The vast amount of data available in Recorded Future opens up many avenues of research. Our 2018 annual top exploited vulnerabilities report was researched completely within the Recorded Future® Platform and restful API. This blog features the steps taken to complete the report, starting with a raw API query from our data science team encompassing all vulnerabilities referenced in 2018, along with the most occurrences of exploit kits, RATs, or phishing. Recorded Future’s collection of dozens of underground and dark web forums was also used for additional context.

For each step, care was taken to ensure that the references produced by the API were legitimate within the portal. I did this in a few ways: first, through the advanced query builder, I was able to check the references between the associations, ensuring that documents were not double counted and were validated by multiple sources.

Second, using Recorded Future’s capability to save and create lists of vulnerabilities, exploits, or notable references found along the way ensured that any work done was not lost and easily repeatable. Recorded Future’s data tagging ensured that I could easily filter results to each individual vulnerability, checking that associated exploit kits and RATs were correctly attributed. Recorded Future’s capability of querying by source type also provided the scope needed to determine how often and for how much some of these exploit kits were selling.

Now, diving in, here’s how we made it happen.

I used Recorded Future’s API to find the highest number of references of vulnerabilities with either Exploit Kit or Remote Access Trojan (RAT) as the malware category, or Phishing as the attack vector. This is a useful query to run for any Recorded Future clients, specifically against vulnerabilities impacting a company’s technology stack. The results will highlight the types of exploits an organization should focus on combating the most, allowing for more targeted research and strengthening their position against future targeted operations.

List of exploit kits in the “Exploit Kits” malware category.

Part of the header for our Phishing attack vector Intelligence Card™.

I checked the API results for the top 10 referenced vulnerabilities to ensure that vulnerabilities were correctly associated with exploit kits, RATs, and malware. I removed ones primarily used by nation-state actors after not finding evidence of their use on underground and dark web forums.

After checking the results, I created a final list of the top 10 vulnerabilities using a Recorded Future list for easy follow-on queries, shown in the image below.

I checked the associated exploit kits, RATs, and phishing references for each vulnerability by using the filter function, noting the number of other associated malware to create the malware number chart, shown below.

I ran a similar query to the one above to find out which vulnerabilities were associated with the most RATs, which resulted in the below list. 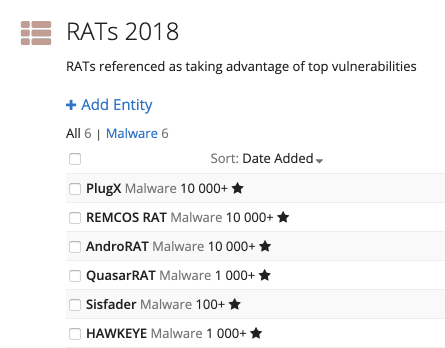 I read Insikt Group notes to see the biggest storylines and which exploit kits were primarily used by which groups using a list of the most referenced exploit kits, shown in the images below.

Part of an Intelligence Card™ with Insikt Group research on the ThreadKit exploit kit. 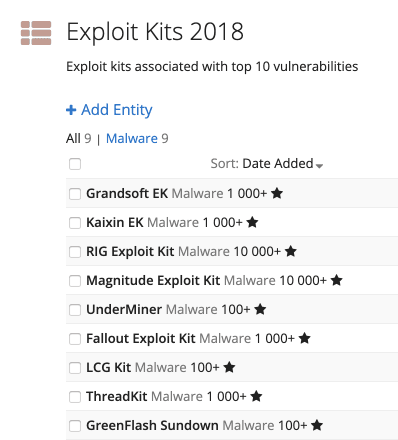 I researched top-referenced exploit kits mentioned on the dark web for evidence of sale, adding good references to a Reference List to be able to easily come back to the results, shown below. 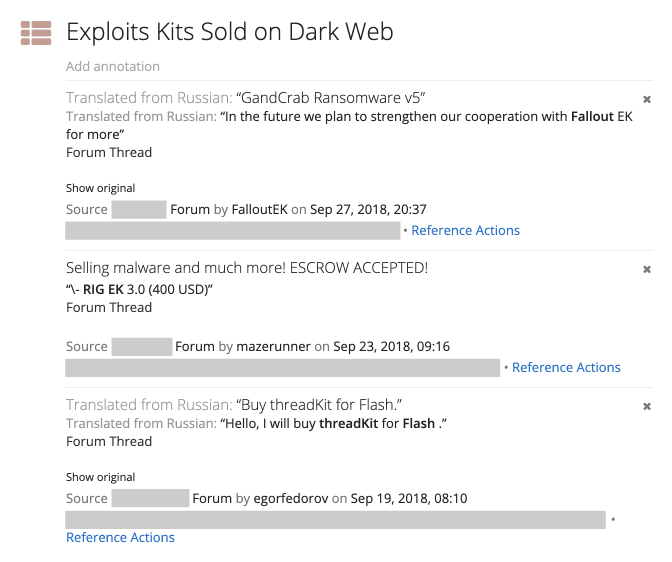 For more information about how Recorded Future can help organizations better understand and prevent threats, request a personalized demo today.