Click here to download the complete analysis, including all of the data referenced in this piece, as a PDF.

2019 marks the 30-year anniversary of the first ransomware attack. PC Cyborg (also known as the AIDS Trojan because it targeted AIDS researchers) was clunky and required mailing a physical check to an address in Panama. However, modern ransomware — the kind that most people think of today with Bitcoin demands and threats to have all your files deleted — started in 2013 with ransomware variants like CryptoLocker.

State and local governments were among the first organizations to be hit with ransomware. The first known case was in November 2013, when the Swansea Police Department in Massachusetts was infected with CryptoLocker. There may have been more infections, but ransomware was not a commonly used term in 2013 (see the Kaspersky definition of CryptoLocker as a “virus”), and any earlier attacks may not have been reported as such.

It should be noted that this list should not be viewed as exhaustive. Ransomware attacks are not always publicly reported by state and local governments and there is no centralized reporting authority, similar to HIPAA requirements, for these agencies. This means that the number of incidents is most likely underreported. Some ransomware incidents may also be simply reported as a malware attack rather than specifically as a ransomware attack. These incidents would not have been cataloged in the search.

Before diving into the results, I do want to say that most of the incidents would not be widely known if not for the work of local journalists. A lot of the information I was able to find was in local papers or local television news reports, which makes sense — most of these incidents are not “big enough” to be considered national news, so local journalists would be the only ones covering them. Covering cybersecurity is not an easy task, never mind when your typical coverage tends to center on daily business news. We commend these journalists for taking on the effort and are grateful for the work they’re doing.

The second finding is that, despite the use of the word “targeted,” it does not appear that these are targeted attacks in the traditional sense. These attacks tend to be more targets of opportunity. Even groups like the teams behind Ryuk and SamSam appear to stumble into these targets. However, once these groups do realize they are in a state or local government target, they take advantage of the fact by targeting the most sensitive or valuable data to encrypt.

A third, and possibly surprising, finding is that state and local governments are less likely than other sectors to pay the ransom. According to a 2019 report from CyberEdge, 45 percent of organizations that were hit with ransomware paid the ransom (this number is up from 38.7 percent in 2018). Based on our analysis, only 17.1 percent of state and local government entities that were hit definitely paid the ransom, and 70.4 percent of agencies confirmed that they did not pay the ransom.

Due to limited data availability, I was not able to determine things like which ransomware variants are most often used in these attacks or get a good grasp on the total amounts of ransom demanded. 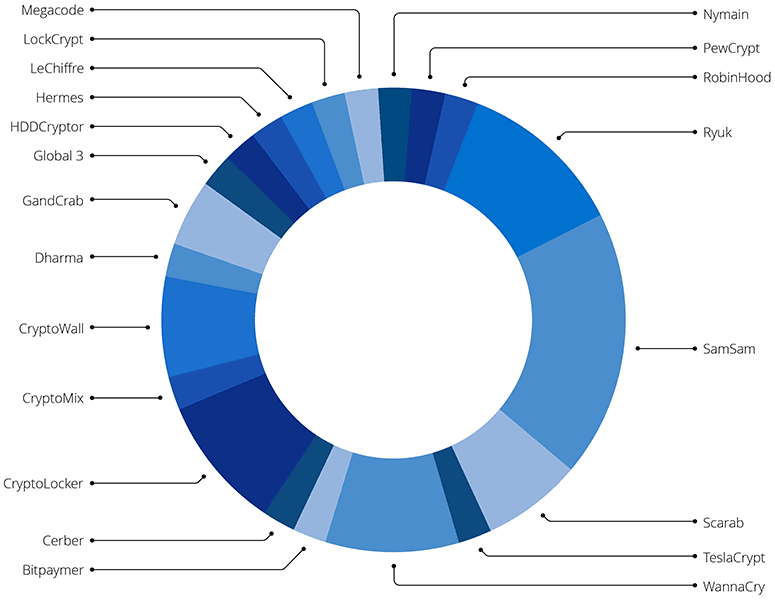 A breakdown of the known types of ransomware used in the attacks. This does not include the category of unidentified pieces of malware, which comprise 76 percent of the total.

Reporting on the type of variant used in these attacks is limited. Only 40 of the 169 reported incidents identified the type of ransomware used in the attack. The variants used in these attacks do seem to mirror the ransomware families used against other sectors. From 2013 to 2016, the primary families reported were CryptoLocker and CryptoWall. In 2017 and 2018, that transitioned to WannaCry and SamSam (though the WannaCry attacks were, unsurprisingly, mostly closely clustered together in May and June of 2017). More recently, in late 2018 and early 2019, the primary ransomware families have been GandCrab and Ryuk.

Although state and local governments do not pay ransoms nearly as frequently as other targets, they generate outsized media coverage because of the effect these attacks have on the functioning of essential infrastructure and processes. This likely creates a perception among attackers that these are potentially profitable targets. The data shows that the reality is more of a mixed bag — although government agencies are less likely to pay the ransom than other victims, there is still an almost one in five chance that an attacker will get paid. Further, these targets may raise the profile of the attacker (for better or worse) since these agencies are more likely to call in law enforcement and the FBI to assist with the ensuing investigations.