Editor’s Note: Recorded Future would like to correct the listing of vulnerabilities tied to Russian APTs based on great feedback from a reader. CVE-2014-3897 is incorrectly linked to Strontium (APT28). This is a typo of Microsoft Internet Explorer vulnerability CVE-2013-3897 originally made in a chart on Page 8 of 2015 Microsoft Security Intelligence Report on APT28 — and copied by other researchers on the web. No changes have been made to the stats derived below, however this brings the overall tally to 32 associated vulnerabilities as of this posting.

Recorded Future analysis of Russian hacking collectives has highlighted 33 known exploited product vulnerabilities used by various groups to steal information or compromise victim computers. 27 of these are tied to APT28 and APT29, collectives known by many names and possibly associated with Russian military intelligence (GRU) and the Federal Security Service (FSB) respectively.

These actors, as well as alleged Russian state-sponsored groups Energetic Bear and Turla, regularly exploit multiple products in the Microsoft family (Office, Internet Explorer, and Windows). This is likely due to their massive user base and — in the case of Office — association with email attachment-based attacks. 55% of known leveraged vulnerabilities belong to the Microsoft family.

This suggests some element of unique capability. For instance, APT28 utilizes seven exploited vulnerabilities for which there are no available public exploits. However, in the case of Energetic Bear, public exploits make up its entire toolkit according to Kaspersky research and the below table.

This approach is akin to a meta-analysis.

No original analysis of malware samples was conducted. The goal of this analysis was to highlight broad trends and tactics employed by Russian threat actors.

Using Recorded Future, we analyzed information published to the web linking Russian APTs to exploited vulnerabilities from January 1, 2012 to July 31, 2016.

As noted in previous Recorded Future APT research, analysis is complicated by the wide variety of branding and codewords applied to different facets of the problem. Some are grouped by signatures, some by actors, others by tools. Recorded Future ontologies and Threat Actor Intelligence Cards™ supported this analysis which focused on the following four Russian-linked APTs/malware families:

The following products were regularly targeted by the four Russian groups: 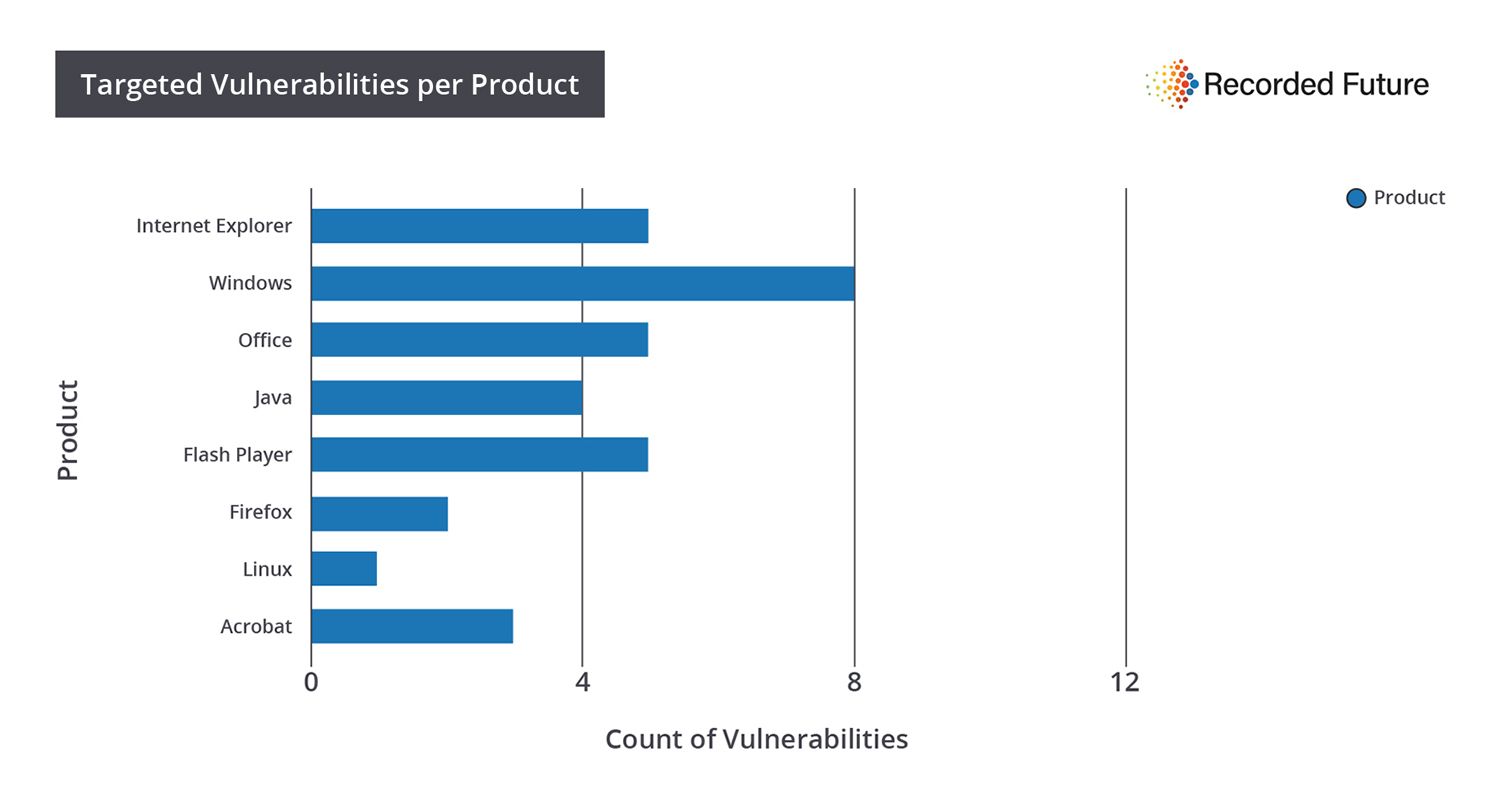 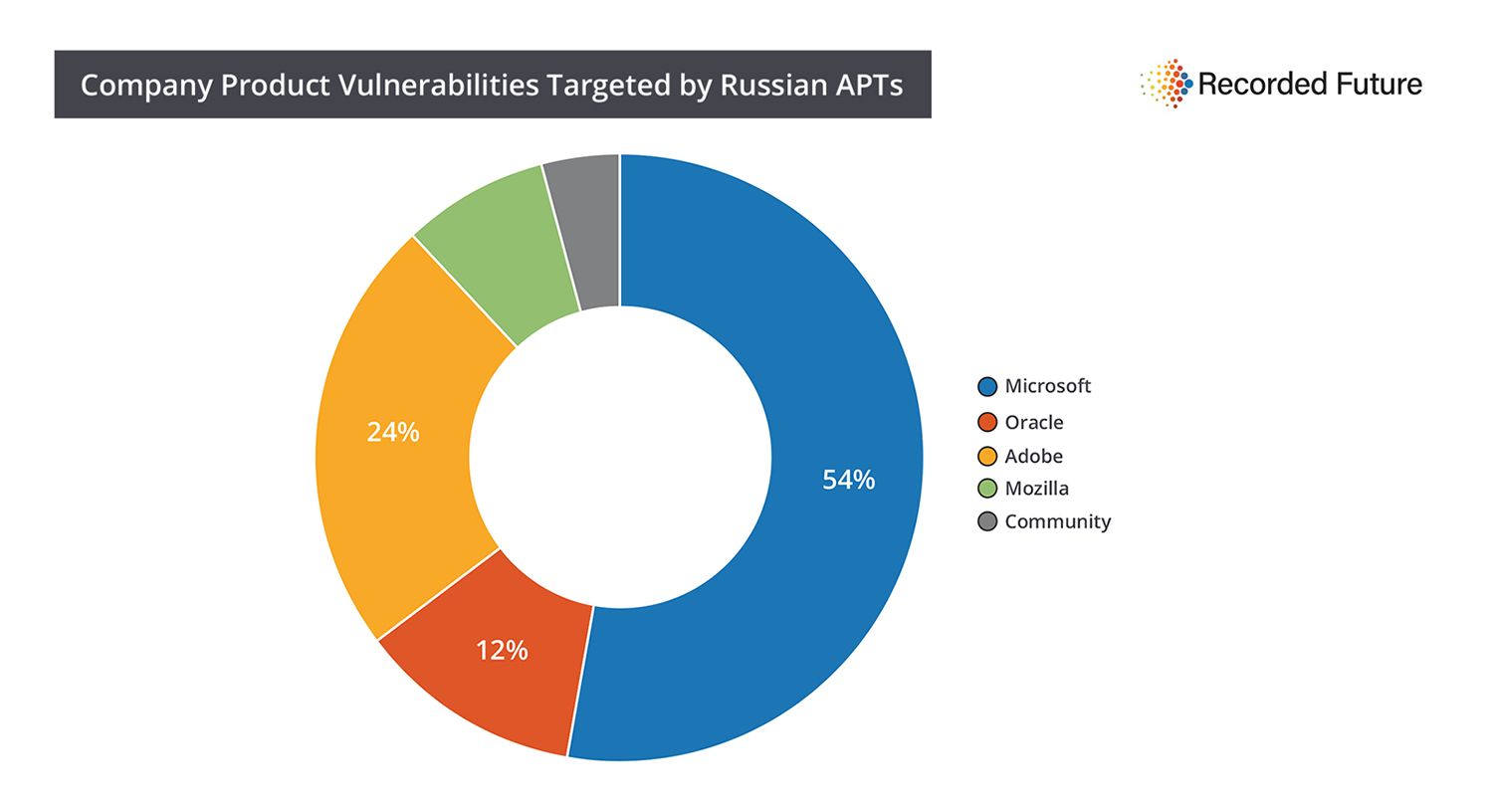 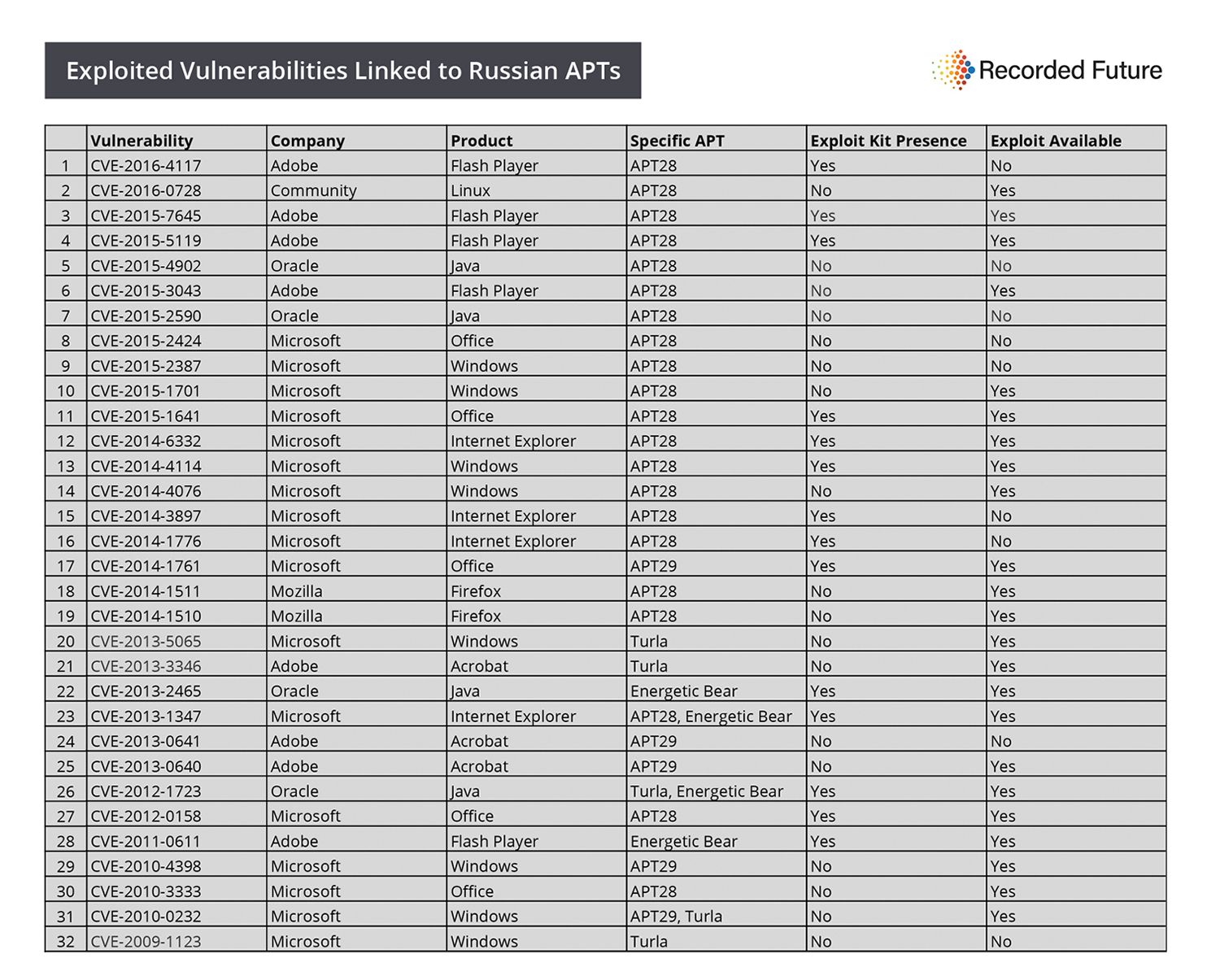 Use of the Identified Vulnerabilities

Recorded Future analysis of exploited vulnerabilities used by APT28 and APT29 revealed no known overlapping use of vulnerabilities. This lends credence to the theory put forth by multiple experts that the two groups — possibly associated with GRU and FSB — don’t coordinate or share resources and infrastructure. Interestingly, according to Crowdstrike, the two groups unwittingly stole the same set of DNC credentials. 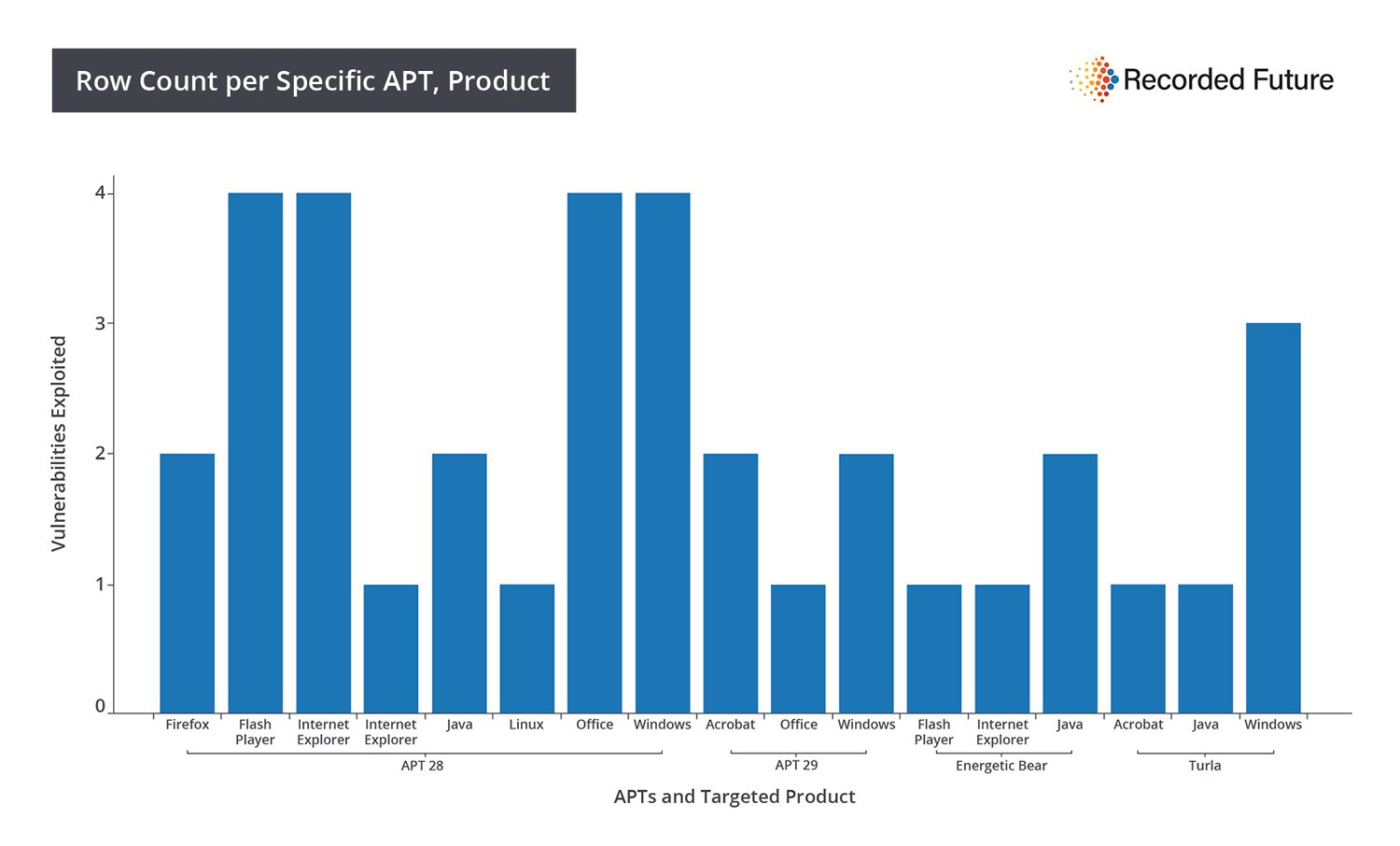 46% of known Russian APT exploited vulnerabilities are also found in exploit kits used by cyber criminals. Exploit kits are available for purchase or rent on deep and dark web (onion) forums for cyber criminals seeking to deploy payloads including ransomware. 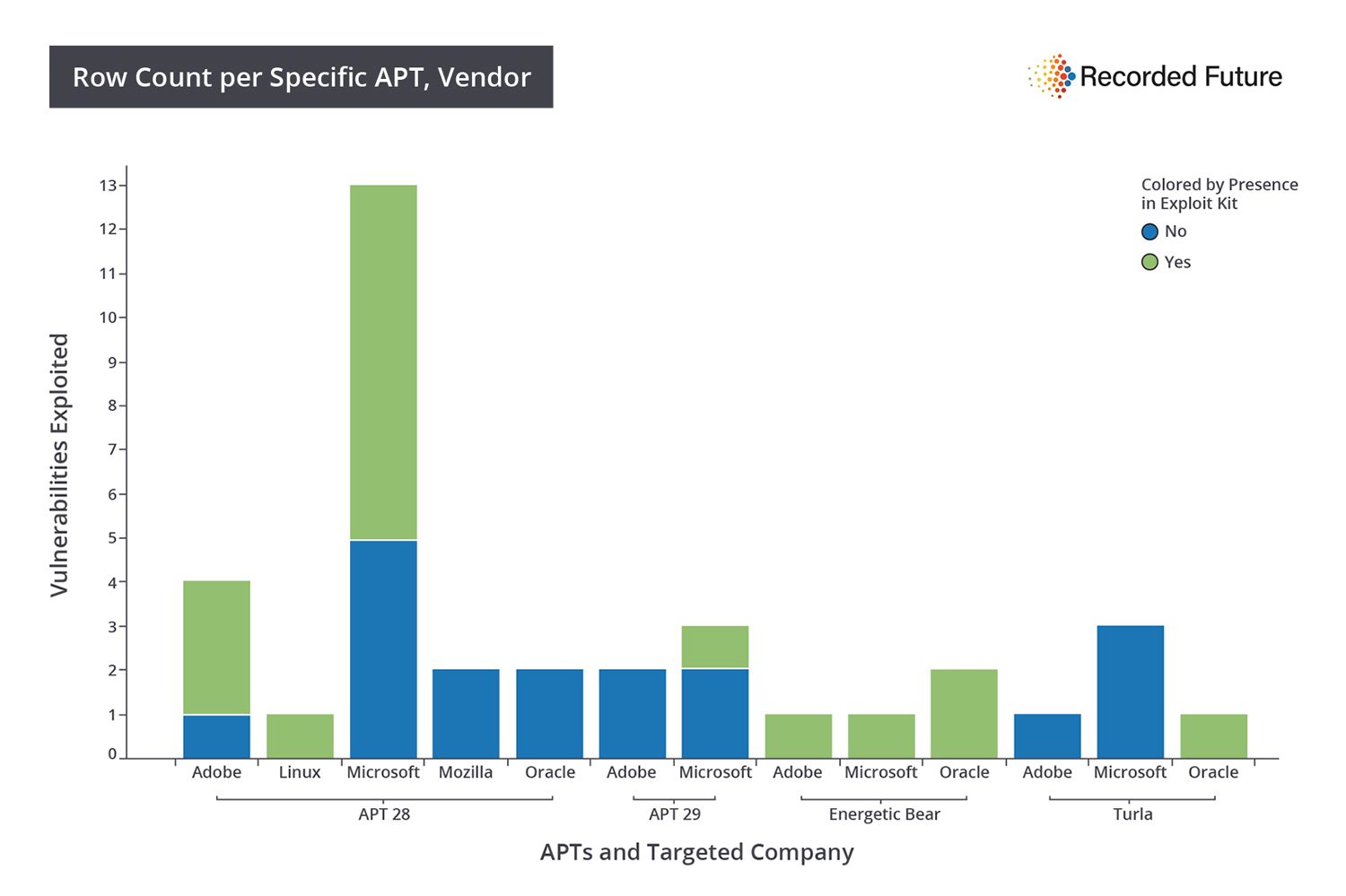 Many exploits (73%) are publicly available for these identified vulnerabilities, although the date of the publication of these exploits (versus the date of the attack) is hard to determine. Regardless, the use of common or public exploits serves a variety of purposes: 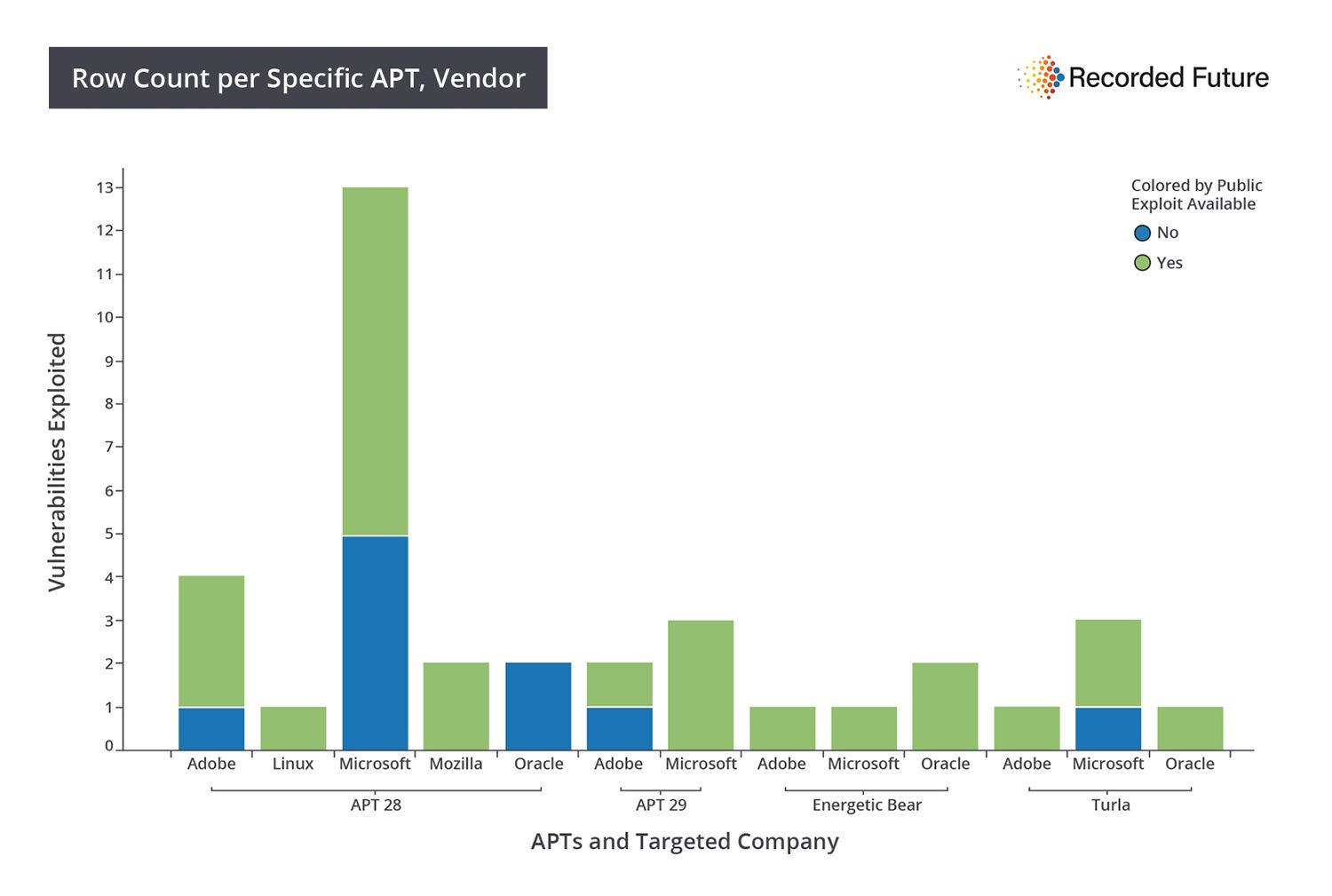 With 1.5 billion people using Windows every day, and 1.2 billion people with Office products installed on their machines, the “play the odds” approach begins to explain the popularity of Microsoft products with Russian APTs.

Popular Java (used by 89% of U.S. computers) and Adobe (50 billion PDFs opened in Adobe in 2015) exploits follow this pattern. Much like with cyber criminals, the path of least resistance to a successful redirection or implant is often the best for a state-sponsored actor targeting strategic information.