On February 1, 2021, the Myanmar military, also known as the Tatmadaw, staged a coup d'etat, resulting in the arrest of the country’s democratically-elected leadership, prompting civilian protests and subsequent violent military crackdowns across major cities. The military junta, led by commander-in-chief Min Aung Hlaing, states that the 2020 general election was fraudulent despite the fact that the internal election commission stated there was no evidence to support these claims. Hlaing declared a one year national emergency and arrested the elected leader, Aung San Suu Kyi, as well as hundreds of others from her National League for Democracy (NLD) party.

Despite a long history of conflict between the Myanmar military and the pro-democracy government, the current protests are the largest since the 2007 “Saffron Revolution”, when thousands of monks stood up to the military regime. On February 28, 2021 more than 18 people were killed and at least 30 were injured as security forces attempted to crackdown on protesters, making it the most deadly day since the coup began. Security forces used tear gas, rubber bullets, flash bang grenades, and live ammunition to fire into crowds of protesters. 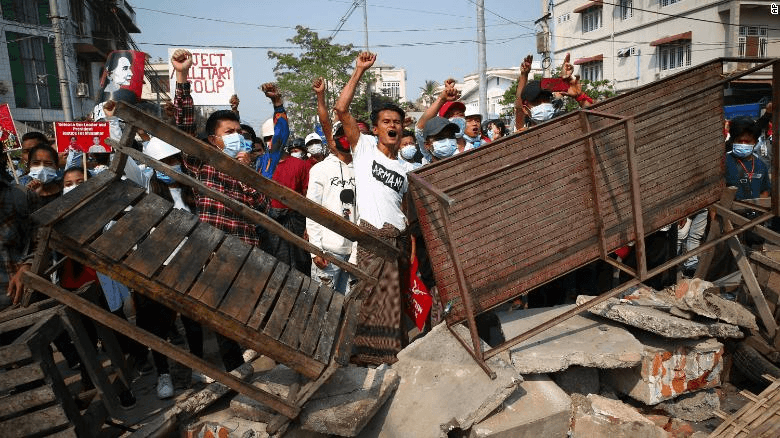 Since the military takeover on February 1, internet and information blackouts have been implemented to restrict civilian access to the internet and cellular networks, including bans of popular social media. This has prompted thousands of users to download virtual private networks (VPNs), secure messaging applications, and the Tor browser to circumvent government censorship via the dark web and underground forums. However, internet shutoffs have prevented internet use altogether for civilians during an 8-hour period each night.

The Republic of the Union of Myanmar, formerly known as Burma, is a multiethnic nation-state with a complex history. Located in Southeast Asia, it shares borders with Thailand, Laos, Bangladesh, China, and India. Its most populous city is Yangon (Rangoon), but the nation’s capital is Nay Pyi Taw. Its population of over 54 million is made up of 135 distinct ethnic groups, which are grouped into 8 "major national ethnic races''. The diversity of ethnicities, language, culture, and religion play a vital role in its current political climate. 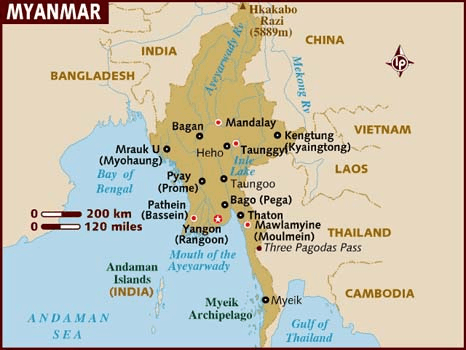 A History Marked by Military Intervention

Burma, as it was formerly known, was historically composed of several territories containing sovereign states, which were united under British colonial rule from 1824 to 1948. After independence, U Nu became the country’s first prime minister and, until 1962, the country enjoyed relative stability in its democratic processes. In 1962, former Prime Minister General Ne Win launched the Burma Socialist Programme Party, and established a one-party totalitarian state dubbed the Socialist Republic of the Union of Burma which lasted until 1988.

Years of martial law led to a rise of student activist groups which harbored growing resentments towards military rule, the economic policies of Ne Win, and the corruption of the government. Student protests gained strength in March 1988 and eventually culminated in the August 8, 1988 protests wherein large demonstrations from students and sympathizers demanded a multi-party democracy, with Aung San Suu Kyi as their leader and a symbol of the pro-democracy movement. Despite the efforts of the activist groups, in September 1988 the military junta enacted martial law, conducted violent crackdowns on protesters, and put Aung San Suu Kyi under house arrest.

In November 2015, Myanmar underwent another multi-party election, with Aung San Suu Kyi’s National League for Democracy (NLD) winning a majority of the votes against the incumbent Union Solidarity and Development Party (USDP). Myanmar’s latest election occurred on November 1, 2020, with the NLD once again winning a large percentage of the overall votes, showing that Aung San Suu Kyi remains a popular domestic figure. It is important to note that the military party automatically receives 25% of the overall seats in the legislative body, without a vote. 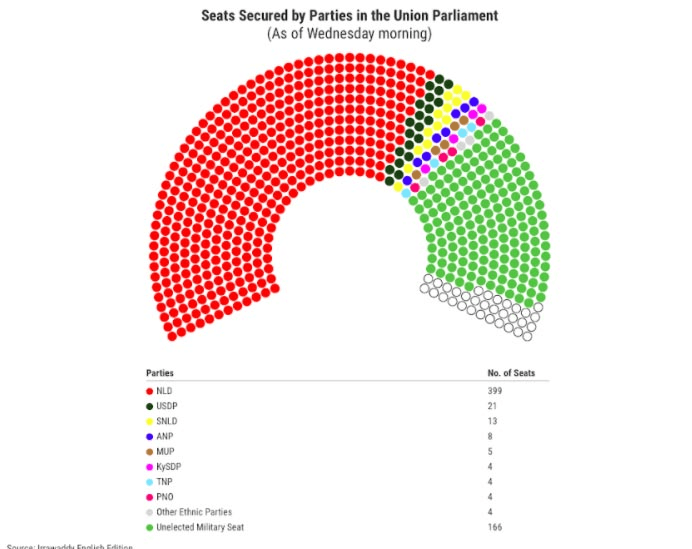 On February 26, 2021, the United Nations Special Envoy of the Secretary-General to Myanmar, Christine Schraner Burgener, addressed the United Nations and urged the Secretary General to intervene, stating that all democratic processes in Myanmar have been “pushed aside”. In response to the killing of at least 18 protesters demonstrating against Myanmar’s military coup, the UN human rights office (OHCHR) and the UN Secretary-General strongly condemned the escalating violence and called for an immediate end to the use of force, calling it “unacceptable”, and calling on the international community to stand in solidarity with peaceful pro-democracy protesters. Additionally, Myanmar’s ambassador to the United Nations, Kyaw Moe Tun, requested intervention on behalf of the protesters, an act that could have dire consequences for him in Myanmar. The military junta fired Kyaw Moe Tun, but the UN still recognizes him as the rightful representative.

The United States Treasury Department Office of Foreign Assets Control issued sanctions on 2 Myanmar military leaders for their role in the violent military coup. The sanctions on General Maung Maung Kyaw, the Air Force Commander in Chief, and Lieutenant General Moe Myint Tun, a former army Chief of Staff and Special Forces Commander, immediately froze any US assets they may have and prohibited Americans from dealing with them.

The United Kingdom’s Foreign Secretary, Dominic Raab, announced sanctions against 6 military members of Myanmar’s State Administration Council (SAC) on February 25, including the Commander in Chief, for “serious human rights violations”. This brings the total to 25 individuals sanctioned by the UK since the beginning of the coup, most of which have directly violated human rights during the coup and subsequent protests. This includes: Commander-in-Chief General Min Aung Hlaing, Secretary of the SAC Lt Gen Aung Lin Dwe, Joint Secretary of the SAC Lt Gen Ye Win Oo, General Tin Aung San, General Maung Maung Kyaw, and Lt Gen Moe Myint Tun.

China’s official state-affiliated media has blocked the UN’s statements of condemnation of the violence occurring in Myanmar and instead opted to label the coup as a “cabinet reshuffle” and called it an “internal issue”. China has expressed disapproval of foreign sanctions, and speculate that these measures will worsen the situation in Myanmar. Some experts point out that China is a longstanding ally of Myanmar and has invested significant resources in building a relationship with its now-detained leader Aung San Suu Kyi. The coup means that China will now have to deal with a regime that does not trust China’s intentions in Myanmar. However, recent reports of mysterious direct flights from Kunming, China to Yangon, Myanmar has created speculation as to China’s involvement with the new regime. On February 25, the Australian Strategic Policy Institute (ASPI) reported on its analysis blog, The Strategist, that it observed a series of mysterious unregistered flights to Kunming, China nightly for more than a week.

Since the military takeover on February 1, the regime has banned international flights coming into Myanmar — with the exception of these unregistered Chinese planes, which have illegally turned off their transponders. ASPI has suggested that the flights may be transporting Chinese cyber specialist personnel and equipment to assist the Myanmar military with internet blackouts and censorship. However, these claims have not been verified and Chinese authorities stated they are transporting seafood between the two countries.

Myanmar’s historic struggle for democracy is not an isolated one in the Asia Pacific region. Several pro-democracy movements are underway across Asia, involving millions of people fighting against authoritarian and communist governments’ draconian measures. From Taipei to Bangkok to Hong Kong, a young generation of peaceful protesters are standing up to authoritarian regimes using what they know best: online solidarity, coded language, hashtags, symbols, memes, and an innovative online political environment that enables them to organize and support each other in peaceful ways. These movements will continue to face major challenges as repressive regimes implement internet blackouts and violent crackdowns. Recorded Future’s Insikt Group is continuing to analyze the evolving situation in Myanmar and the impact that martial law and internet blackouts are having on the cyber landscape, businesses, and education.