Meltdown (CVE-2017-5754) and Spectre (CVE-2017-5715 and CVE-2017-5753) were discovered and reported using responsible disclosure methods in July 2017. Vendors had been working on patches and were scheduled to release them ahead of a January 9 embargo date, but security researchers discovered the changes in early releases of the patched operating systems and began speculating about the vulnerability, forcing the researchers to release information prior to the original embargo date.

Meltdown and Spectre are both hardware vulnerabilities. The researchers behind both vulnerabilities have created a web page that explains both attacks in detail and provides background on the research they did to find the attacks.

Meltdown is specific to Intel processors and takes advantage of speculative execution and indirect branch prediction that Intel has enabled in its chipset. Intel states that other chip manufacturers may be susceptible to this vulnerability as well, but the researchers who uncovered the flaw were not able to replicate it on other chipsets.

Spectre was successfully tested by researchers on Intel, ARM, and AMD processors. While the result of an attack exploiting the Spectre vulnerability is fundamentally the same as Meltdown, the attack surface is slightly different.

While the prevalence of vulnerable systems is extensive, the threat should not be blown out of proportion. Successfully exploiting this vulnerability would allow an attacker to read small arbitrary chunks of privileged kernel memory, bypassing Kernel Address Space Layout Randomization (KASLR), a key mitigation against kernel exploits in modern operating systems.

While consumers are urged to apply patches as soon as they become available, this vulnerability is unlikely to reach a critical threat level on consumer endpoints unless a public exploit becomes available that allows attackers to leverage arbitrary kernel memory reads in a useful manner becomes available.

Security implications may prove greater for cloud services where the segmentation of these services may be threatened by an ability to read privileged memory. Cloud service providers such as Google have taken a proactive stance to remedy the issue before disclosure. In addition, both Amazon and Microsoft have already delivered emergency patches to their AWS and Azure cloud services, respectively.

While there have been several potentially disturbing proof-of-concept exploit code examples released, to our knowledge, this has not been exploited in the wild. Reliably exploiting these vulnerabilities in the wild may prove challenging for all but the most advanced attackers. The next couple of weeks will help to determine whether the proof-of-concept code is deployed widely.

The best way to mitigate against these attacks is to apply vendor patches as quickly as possible. Apple released a patch for High Sierra (10.13.2) in December that fixes these vulnerabilities, and Microsoft has issued an out-of-band security patch for Windows systems as well. The maintainers of the Linux kernel expect to have their patch ready for release Friday, January 5 — from there it should quickly make its way to various Linux distributions.

One note of caution, the new patch for Windows system reportedly can conflict with anti-virus systems and may result in a “Blue Screen of Death.” Microsoft has added a technical note explaining the issue, and security researcher Kevin Beaumont has released a spreadsheet that documents which anti-virus vendors are updated to support the new patch in Windows.

In addition to releasing a patch, Microsoft has released a PowerShell script that users can run to verify that their systems are properly patched and no longer vulnerable to Meltdown and Spectre.

Google has released a separate document providing mitigating steps for Google Chrome. Specifically, they recommend enabling Site Isolation as an added layer of protection. Firefox has published a report stating that they are working on a fix for this issue. Unfortunately, there appears to be exploit code showing that an attacker can use Meltdown to expose saved usernames and passwords in Firefox. Presumably, the same type of attack could be used again in Safari and Microsoft Edge.

Exploit code was shared on Twitter showing how an attacker can use Meltdown to expose saved usernames and passwords.

Amazon has already patched their Amazon Web Service and Microsoft has deployed patches to their Azure service. Because cloud providers are particularly susceptible to Meltdown and Spectre, it is recommended that customers reach out to their cloud providers to understand what their mitigation plans and timetables are.

A list of vendors and their patch information has been appended to this report.

Recorded Future is tracking the latest developments for both Meltdown and Spectre, including monitoring closed sources to look for attackers who may try to weaponize these vulnerabilities, and new vulnerabilities that may arise because of the original research work.

Underground actors posting and discussing on these exploits already. 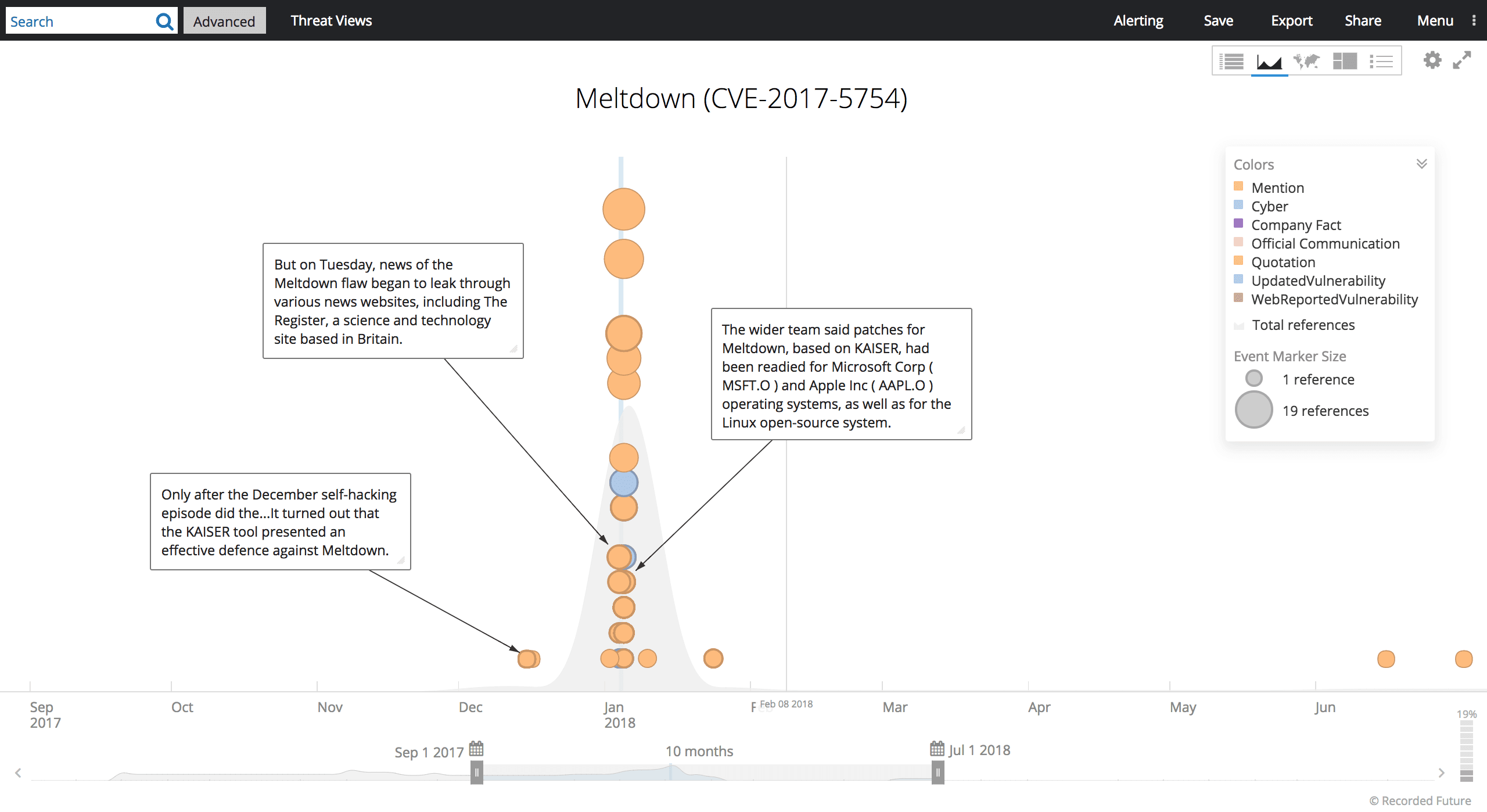 Our machine-learning algorithms automatically ingest and combine different threads of these attacks (such as correlating Meltdown with CVE-2017-5754 in the screenshot above) and make it easier for our customers to track new threats and keep updated with the latest information on existing threats.

These are big vulnerabilities, there is no doubt about that. They have already impacted thousands of organizations around the world and will continue to create a great deal of work as systems are patched and mitigations are put into place. The big question is: what is the risk to your organization? Right now, there doesn’t seem to be a big risk for most companies and organizations, but that might change over time.

Keep in mind that this is a new type of vulnerability, something we haven't seen before. There is a lot of speculation that threat actors can build upon this work to discover new and even more dangerous vulnerabilities. It could take months to determine if this is a blip or the start of a new class of threat that defenders have to address.

To get more information on patching and additional resources, download the appendix.