Hunting Hidden Lynx: How OSINT is Crucial for APT Analysis

We will detail how the C&C infrastructure and tools used by hacker group Hidden Lynx during its VOHO campaign (2012), excellently documented by Symantec researchers last September, overlap with tools used in other high profile operations during the past few years. The other campaigns evaluated are Operation Aurora (2010), Operation DeputyDog (2013), and Ephemeral Hydra (2013).

Security researchers have shown time and again that cyber actors frequently recycle effective attack methods. These attack methods retain telltale signatures even as a threat actor’s targeting and tools evolve. Therefore, our investigation looked for clues that linked hackers across one or more of the campaigns in question.

Seeking to tease out any possible links between Operation Aurora, VOHO, Operation DeputyDog, and Ephemeral Hydra, we began with Symantec’s Hidden Lynx report as our foundation. The authors of that report identify three primary tools used in the campaigns attributed to Hidden Lynx: Trojan.Naid, Backdoor.Moudoor, and Backdoor.Hikit.

Using Recorded Future, we quickly built a timeline of the reported use of those tools in major security incidents, finding many events prior to the early 2013 exposé on Hidden Lynx. 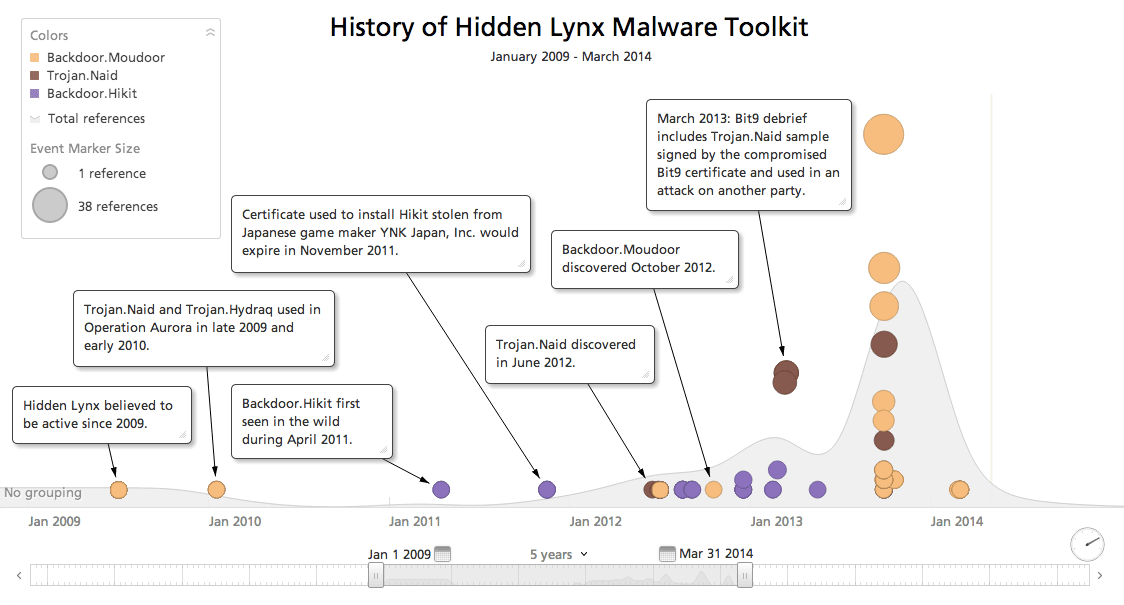 Our analysis, based solely on information openly available on the web, builds on significant technical research that has explicitly linked elements of the aforementioned campaigns. In particular, FireEye during the fall of 2013 called out infrastructure overlap between Ephemeral Hydra and DeputyDog.

Aspects of these two campaigns used tools and C&C infrastructure reportedly used by Hidden Lynx. These include a Hydraq/McRAT variant with lineage traceable to Aurora. Symantec during 2012 linked the Elderwood Project to Operation Aurora; Trojan.Naid and Backdoor.Moudoor were also used in Aurora, by the Elderwood Gang, and by Hidden Lynx.

A brief summary of targets for each campaign:

Much of the above was well documented. However, some connections described over the course of several years, oftentimes by different research teams published across a variety of sources, are difficult to recall or might even be obscured by more recent information.

What links did we discover in analysis using Recorded Future? 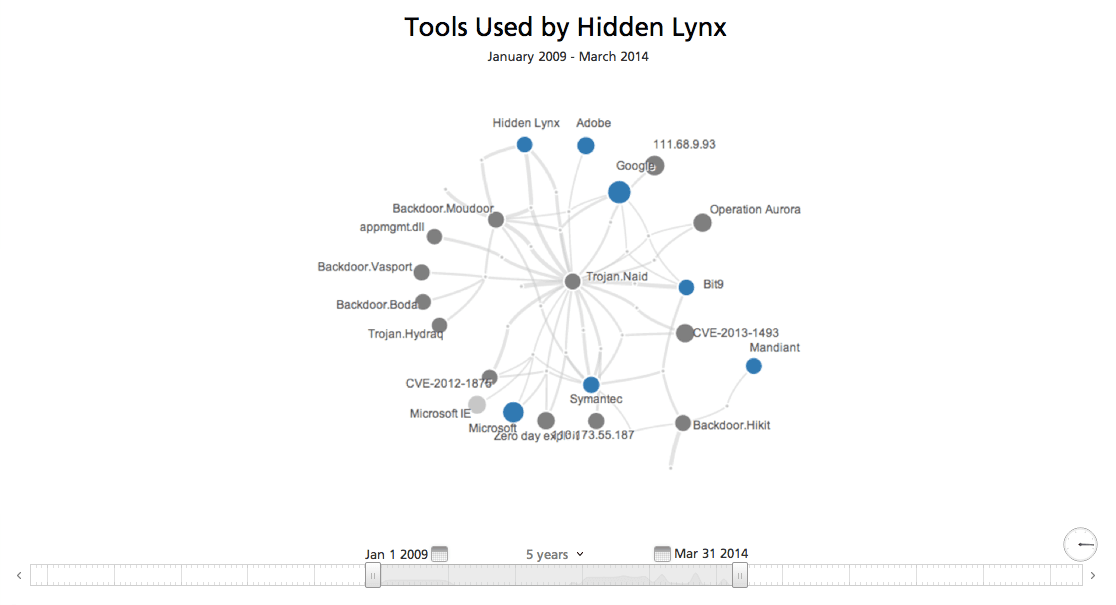 The above network shows relationships between three tools used by Hidden Lynx during its VOHO campaign: Trojan.Naid, Backdoor.Moudoor, and Backdoor.Hikit. The connections indicate actors, targets, vulnerabilities, and technical information related to those tools. Note the density of connections between Moudoor and Naid, which are commonly reported as complementary tools.

Trojan.Naid specifically was used to attack security firm Bit9 ultimately compromising its digital code signing certificate. This allowed the hackers to then take on higher value targets as part of the VOHO campaign. Naid was also used in the 2010 campaign known as Operation Aurora.

One of the key findings noted above was the identification of two vulnerabilities that were exploited by both Hidden Lynx and the Elderwood Gang, which has been linked to Operation Aurora. CVE-2012-1875 and CVE-2012-1889 are at the center of the network below, surrounded by targets and other related vulnerabilities. 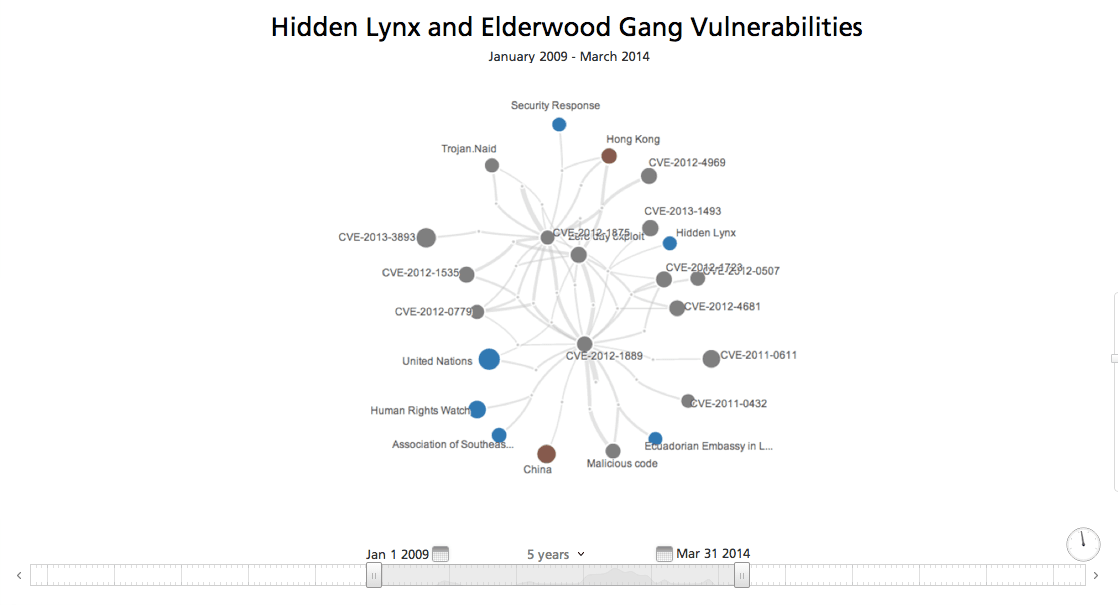 After visualizing these links, we explored the vulnerabilities at the edges of the graph, looking for connections with exploits used in other campaigns. We found such a link in CVE-2013-3893, which was leveraged in the August 2013 attacks on Japanese targets that FireEye dubbed Operation DeputyDog.

Similar to our approach with Symantec’s report on Hidden Lynx, we used Recorded Future to organize the technical details about the DeputyDog attacks to reveal technical information described in the open source reporting across multiple campaigns. 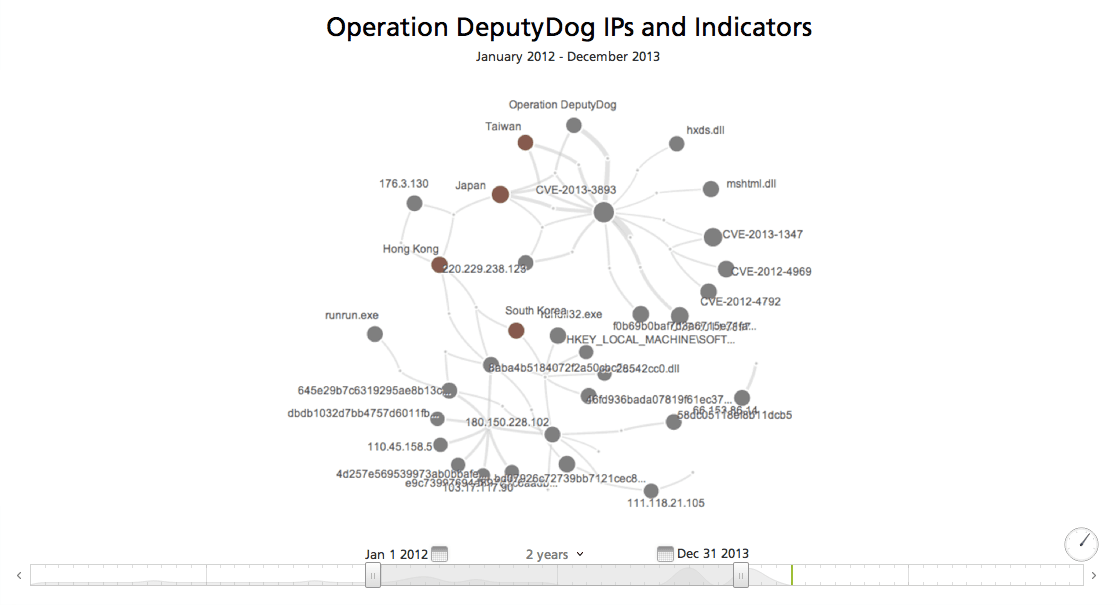 The above network shows technical details and locations, both server hosts and targets, related to Operation DeputyDog. This enabled creation of useful lists for us to seek overlap with other operations, establish the timing of exploits and C&C infrastructure used, and arrange alerts for ongoing monitoring.

Analysts were able to track 66[.]153[.]86[.]14 back to an email address linking DeputyDog and the Hidden Lynx VOHO campaign. Separate analyses in November 2013 describe C&C servers used by Trojan.APT.9002 also used in the Hidden Lynx attacks against Bit9. 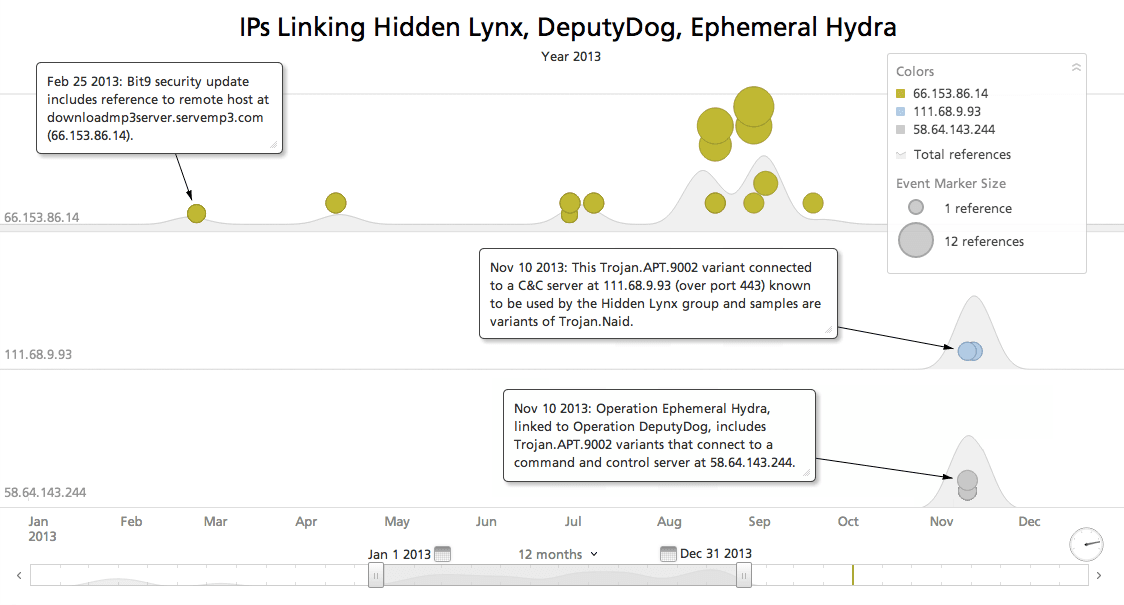 This investigation sheds new light on these campaigns, without depending on private or freshly disclosed technical intelligence. Once assembled and structured for analysis, the collective knowledge about Hidden Lynx and many other APT campaigns, some publicly available for years, allows us to better understand intent and capabilities.

We often hear leaders lament the present state of intelligence sharing, and advocate for new approaches with hold great promise. Meanwhile, large amounts of intelligence are already being shared in open source reporting. To yield insights, we must deal with great variety in sources and formats. The above data points were derived from PDFs, blog posts, and write ups from security firms coming from hundreds of websites. Recorded Future captures and structures that information, and provides analytic tools to help quickly make sense of this information from disparate sources.

The results of such threat actor and campaign analysis, corroborating evidence across multiple sources and linking technical details across security blogs, social media, and research forums, are insights that are useful from incident response to threat intelligence.