This report examines trends in malware use, distribution, and development, and high-risk vulnerabilities disclosed by major hardware and software vendors between January 1 and June 30, 2022. Data was assembled from the Recorded Future® Platform, open-source intelligence (OSINT), and public reporting on NVD data. This report will assist threat hunters and security operations center (SOC) teams in strengthening their security posture by prioritizing hunting techniques and detection methods based on this research and data along with vulnerability teams looking for ways to prioritize patching and identify trends in vulnerability targeting.

Malware development and vulnerability exploitation in H1 2022 were defined by tenacity along several aspects, including criminal services, exploit targets, infrastructure maintenance, and operational longevity. The malware categories that were at the forefront of public and criminal attention were wipers, such as were observed targeting Ukraine, infostealers, with some popular variants resurging after an initial disappearance, and ransomware, which continues to victimize all sectors worldwide. The vulnerability most in defenders’ sights at the beginning of the year was Log4Shell, while by the end of June, the Follina vulnerability (which can be exploited via a malicious document without using macros) indicated a future potential direction for zero-day exploits for the rest of the year.

The top referenced malware variants associated with cyberattacks in H1 2022 were Cobalt Strike, Conti ransomware, Pegasus, DeadBolt ransomware, and Emotet. References to Cobalt Strike were sharply higher than for the others, demonstrating its continued prevalence across many types of cyberattack campaigns.

The top referenced vulnerabilities associated with cyberattacks in H1 2022 affected Apache’s Log4J (Log4Shell), Microsoft Windows (Follina), Microsoft Exchange Server (ProxyShell), Atlassian’s Confluence, and the Java Spring Framework. This landscape reflects both zero-day exploitation and continued targeting of known vulnerabilities, and Log4Shell exploitation was observed up to the end of June.

Our outlook for the rest of 2022 based on H1 2022 is that ransomware remains a major threat (although a decline is overdue), more widespread multi-factor authentication (MFA) will reshape many areas of the criminal landscape, and Russia’s war against Ukraine is likely to result in yet more novel malware from that region.

If there is a word that sums up the landscape of malware development and vulnerability exploitation in H1 2022, it is almost certainly “tenacious”. The high-volume creation of wiper malware against Ukraine, the re-emergence of a popular infostealer, the ongoing attention to major vulnerabilities like Log4Shell and ProxyShell, the disbandment of the Conti ransomware group to support other ransomware operations, the appearance of new tactics in the (still not dead) Emotet botnet, and the continuing evolution in tactics from major cybercrime group FIN7 exemplify a criminal underground and APT threat landscape in which many threats can disappear or change temporarily but are very difficult to stop entirely. While not directly within H1 2022, the emergence of Lockbit 3.0 as the most recent version of that ransomware further supports this view of the threat landscape.

The criminal underground on which threat actors rely for new malware or vulnerability exploits has shown a similar level of persistence. The “Faceless” proxy service, which we reported on in April 2022, involves many of the aspects we have seen across malware and vulnerabilities in the first half of 2022: malware designed to target online retailers, emphasis on remote code execution (RCE) and zero-day vulnerabilities, and long-term criminal operations that can survive law enforcement action, rebranding, and lack of access to infrastructure. Similarly, the creation of BreachForums after the seizure of Raid Forums by law enforcement shows the persistence of criminal networks and the ease with which new forums can replace closed ones where there is continued demand.

The charts below show the top most referenced malware variants and vulnerabilities associated with reported cyberattacks in H1 2022. These were based on queries for any malware entity or any vulnerability entity that appeared in reports of a cyberattack as collected in the Recorded Future Platform.

The malware data set best shows the persistent reliance of threat actors on Cobalt Strike for command-and-control (C2) infrastructure, although a larger shift to the pentesting tool Brute Ratel C4 may be in the near future. Another trend highlighted in Figure 1 is the persistent ransomware threat, with attackers continuing to develop novel ransomware for specific targets like QNAP (in the case of DeadBolt). 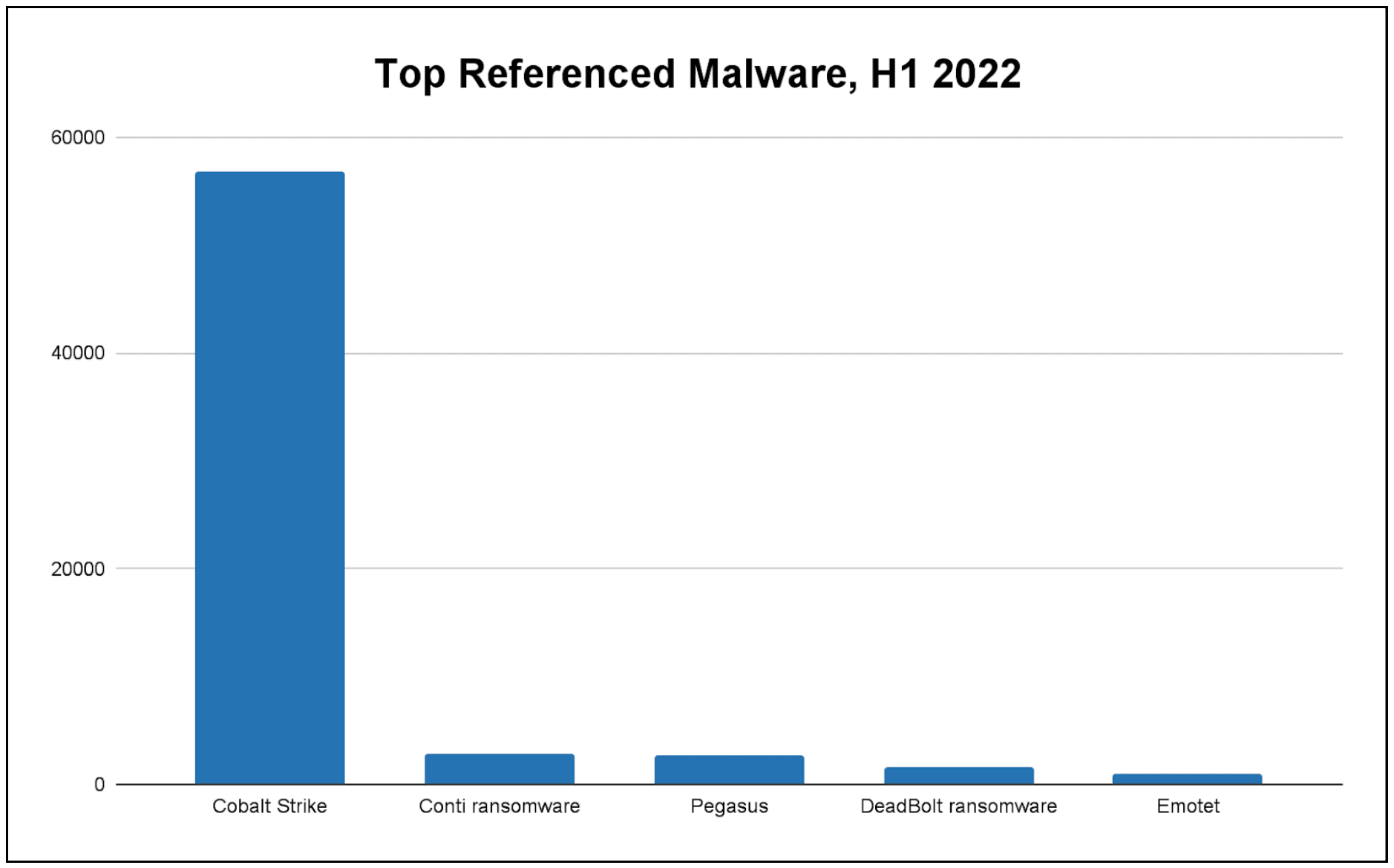 The vulnerability data set summarized in Figure 2 highlights the continued dominance of Microsoft vulnerabilities in cybercriminal and APT exploitation. 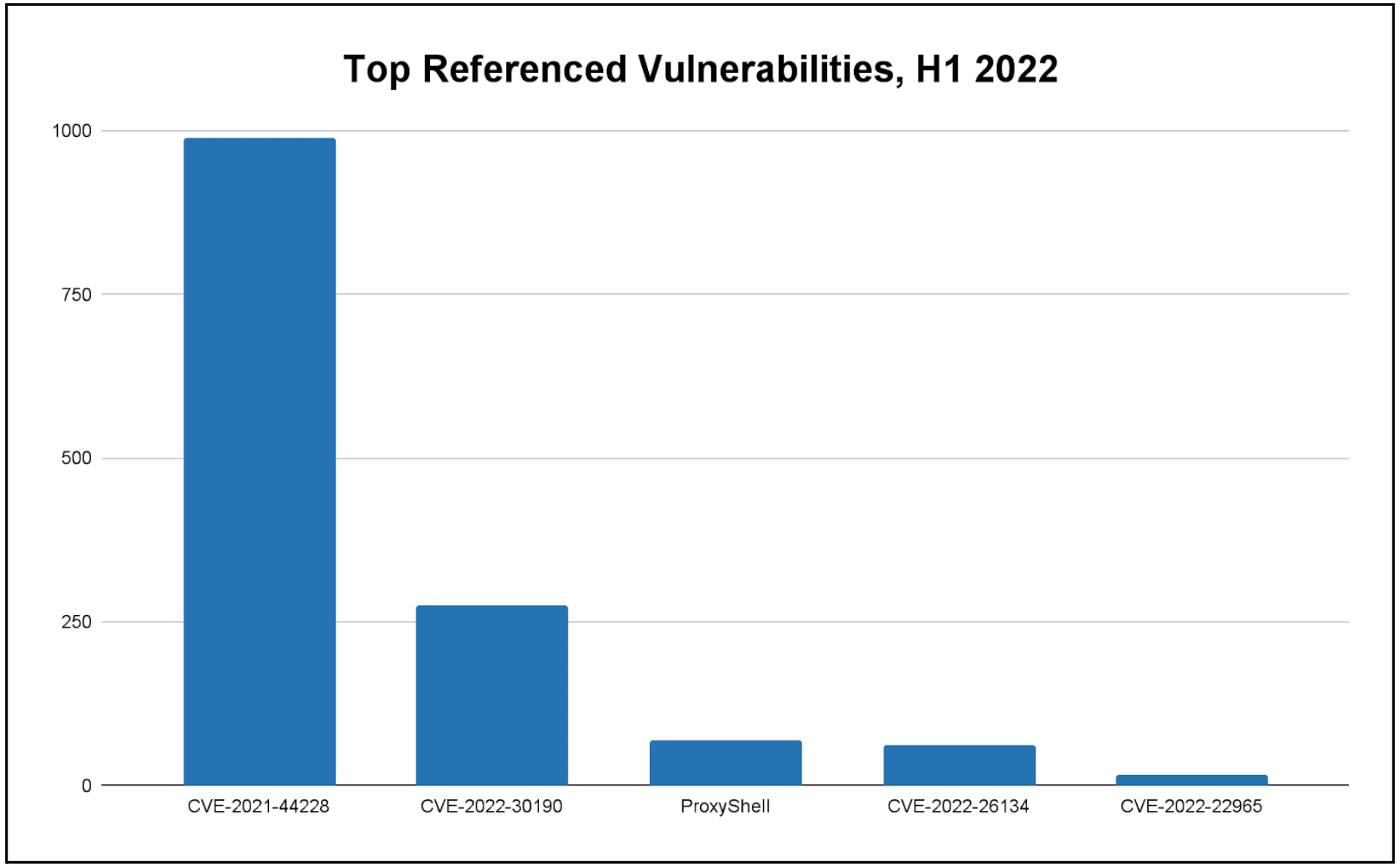 Wipers, Infostealers, and Ransomware at Forefront of Malware Reporting

In H1 2022, one of the biggest drivers of discussion of new malware and vulnerability exploitation was Russia’s invasion of Ukraine and the subsequent appearance of cyber threat campaigns apparently designed to support Russia in disrupting Ukrainian targets or destroying sensitive Ukrainian data. In particular, the disclosure of 9 distinct variants of wiper malware in line with previous Russian state-sponsored activity exemplified the Russian government’s total approach to warfare against its neighbor, including both kinetic and cyber attacks. This trend also appeared to show a hostile government enjoying less time and fewer resources to develop malware against key geopolitical targets: the 9 pieces of wiper malware that were deployed against Ukraine were found to be increasingly simplistic over time, with devolution including less obfuscation and fewer stages between variants.

A malware category that has consistently fed compromised data to dark web marketplaces like Russian Market is infostealers, which are designed to identify and exfiltrate sensitive data from victim machines. After the popular infostealer malware Raccoon Stealer temporarily halted operations in March 2022, many threat actors switched from Raccoon Stealer to other infostealer brands such as Mars Stealer, MetaStealer, BlackGuard, RedLine, and Vidar. However, Raccoon Stealer 2.0 has reemerged at the end of H1 2022, proving to be again as popular as it was when we analyzed it in 2019 and saw it “spiking in popularity and activity across underground forums”.

Perhaps the most dramatic moment in a malware operation for H1 2022 occurred when the operators of the Conti ransomware targeted the government of Costa Rica, said that they were “determined to overthrow” that government as part of a series of crippling attacks, and then shut down their extortion website infrastructure as part of a disbandment that allowed individual members to support other ransomware gangs. Conti’s antics aside, its disruption of critical government services in Costa Rica is one of numerous examples in H1 2022 of ransomware attackers bringing organizations’ operations to a halt, with some of the most prolific operators being those behind the LockBit 3.0 and Hive ransomware families.

Mirroring the bravado of the Conti Gang, the financially motivated cybercrime group FIN7 was identified by Recorded Future as having created a fake cybersecurity company, Bastion Secure, which it used to try to distribute post-exploitation tools like Carbanak as if they were information technology (IT) management and security monitoring tools. This was one example of the group’s evolution of new tactics. Mandiant’s update report on the activities of FIN7 pointed out that the group heavily uses junk strings to obfuscate its malware. Its LOADOUT downloader, a VBS-based payload, has used junk code (such as the not-so-subtle string “FUCKAV”) for obfuscation. Additionally, Mandiant found that FIN7 would use public code analysis repositories to test whether versions of LOADOUT were being recognized by antivirus engines, and if they were, the group would quickly add in even more junk code to stay ahead of detection.

From 2021 to 2022, one of the most discussed topics with respect to cybersecurity was Log4Shell, the simple-to-exploit vulnerability in Apache’s Log4J software that exposed hundreds of thousands of organizations based on the logging utility’s ubiquitous use. As recently as June 2022, we have continued to see news of cyberattackers conducting Log4Shell exploitation. Exploitation of an earlier set of vulnerabilities known as ProxyShell, which affect Microsoft Exchange, was also an ongoing threat from multiple threat actors. As we have identified in vulnerability research within the last several years, cybercriminals prefer to target a small set of known vulnerabilities that they can count on to be present on victim systems.

The vulnerabilities that had the highest risk scores in the Recorded Future Platform and were disclosed in H1 2022 are shown in the table below. All of these vulnerabilities were identified as having been exploited in the wild, either based on open-source reporting or our internal honeypot tracking. From a product perspective, the most notable aspect of this list is that vulnerabilities affecting Linux outnumber those from Microsoft.