It is no secret many of today’s most prominent geopolitical crises are not merely random occurrences. The majority of these ostensibly isolated phenomena occur in the context of long-standing conflicts, and simply represent a peak in tensions. These deep-seated conflicts contain certain patterns of rhetoric and behavior that either push tensions towards or away from these peaks.

Finding indicators that pointed to a particular trend is not hard. Knowing the details of a crisis, one can look back and isolate the particular causes of a rise or fall in tensions. Anticipating whether that same set of causes may lead to a rise or fall in tensions in the future is more difficult. This difficulty is partly due to the limitations inherent in attempting to parse through the massive amounts of news that is published each day.

The London-based Ethnographic Edge has attempted to overcome some of these difficulties by using a two-step analytical process called social risk analysis (SRA) to forecast whether tensions will increase or decrease in a number of geopolitical hotspots. The first step in this process is a passive procedure that uses data analytics software formulated by Recorded Future to scan mainstream media publications and blogs related to the issues in question. Recorded Future's web intelligence software is able to quantify the "sentiment" expressed in these sources.

The findings of this scan are then run through a series of in-house predictive algorithms designed to match the findings to any historical patterns. If a match between current and past indicators is found, then the Ethnographic Edge software generates a positive or negative signal, corresponding to whether tensions are expected to rise or decline in a given area.

After a signal is generated, Ethnographic Edge’s team of researchers undertake a qualitative analysis to contextualize how and why tensions are expected to rise or fall. If a signal is found to not fit within the social and cultural context in which the crises is occurring, then it is dropped. If it is found to make sense, then a report is published on the website. To date, Ethnographic Edge has 80% accuracy in its predictions. A case study of how Ethnographic Edge’s process was applied to Iran can be found below.

In late November 2013, Ethnographic Edge registered a signal indicating Middle Eastern tensions related to Iran would be increasing over the subsequent two weeks. This signal came as Iran reached an agreement with the P5+1 (United States, Russia, China, United Kingdom, France and Germany) regarding Iran’s nuclear program. While this agreement was generally met with optimism from the international community, Ethnographic Edge’s software indicated that it would cause an increase in regional tensions.

Researchers at Ethnographic Edge concluded this regional tension was largely tied to the displeasure that Israel and Saudi Arabia expressed regarding these developments. In the succeeding weeks, US enthusiasm for the deal largely dissipated and Saudi Arabia and Israel continued to be notably vocal in their anti-Iran rhetoric, increasing regional tensions. A Recorded Future visualization allows us to quickly gather that information if we look up Israel along with Iran or Saudi Arabia, as can be seen below. 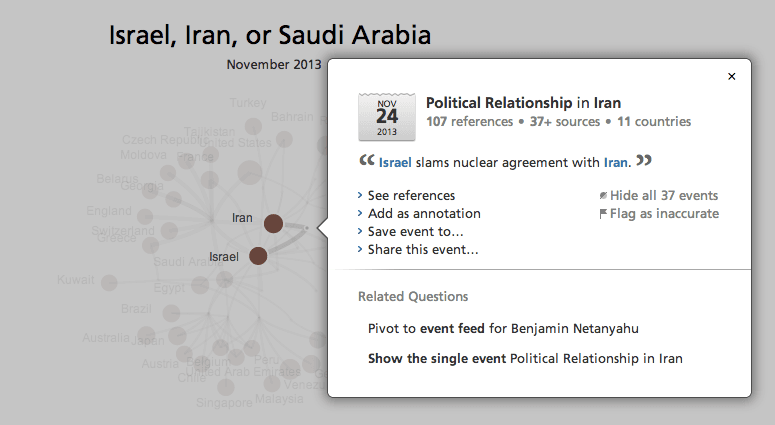 Researchers also calculated the effect of the deal and consequent tensions on the price of crude oil. They concluded that a predictable plunge in oil prices would follow as a knee-jerk reaction to the Geneva agreement, but that would only concern the short term, as the increasing tensions in the region would probably swell oil prices shortly after. The prediction proved accurate, as oil prices fell rapidly following the Geneva agreement, but have been on a continuous sharp rise since the end of November.