China’s entire propaganda system is working at full force in the largest Chinese state-sponsored overt influence campaign to date observed by Recorded Future. The narrative warfare operation, which aims to reshape global definitions of democracy, criticize American democracy, and position China as a democracy itself, has been amplified by nearly every Chinese state-affiliated media outlet and spokesperson and dozens of state-hired influencers. With thousands of social media posts, dozens of cartoons and memes, news articles and academic reports, panel discussions, and videos that criticize US democracy, the narrative they are pushing is simple: US democracy is harming the world; trust China’s “whole-process people's democracy” instead. This ongoing messaging, which began on December 2, 2021, is particularly aimed at global, English-language audiences outside of China and likely began as a preemptive defense campaign ahead of the December 9 and 10 Summit for Democracy.

Recorded Future’s Insikt Group has translated and analyzed the Communist Party of China’s (CCP) propaganda strategies and has found that a primary tactic in its toolbox is the coordination of various communicators, such as news media and civil society organizations, to disseminate the party’s messages through “polyphonous communication”. This strategy is clearly demonstrated in this influence campaign on democracy. This influence operation highlights classic examples of narrative warfare (the fight over the meaning of information and identity) and is being used strategically by the CCP in an attempt to redefine what the world thinks about democracy and sway people towards viewing China not as an autocratic, authoritarian regime, but as a beloved socialist democracy that puts its people first. They call this a “whole-process people's democracy”. Their objective is simple: isolate the United States and reshape governance to a global audience, with China’s model being the global standard.

The CCP’s overt influence campaigns rely on a simple strategy: consistent messaging through narrative warfare and a high volume of posts and chatter across all online media platforms. The effectiveness of this strategy is difficult to assess. However, China has a global reach. Its message is being amplified in foreign countries, especially in Belt and Road Initiative nations where China has partnerships or ownership of media outlets. Recorded Future has uncovered evidence that China’s propaganda department is contracting with foreign media outlets and marketing companies to disseminate pro-China propaganda in foreign countries. The investigation is ongoing, and a full report on this topic is forthcoming.

Before this campaign, Chinese state-affiliated media accounts referred to “democracy” approximately 5 to 10 times per day, on average. These mentions revolved around news cycles related to political topics in foreign countries. However, toward the end of November, as US president Joe Biden prepared for and promoted his flagship Summit for Democracy, the Chinese government apparatus responded with an anti-US influence campaign, highlighting perceived weaknesses of US democracy and harm that the US has caused around the world. On November 24 and 25, we observed a marked increase of mentions of “democracy” across Chinese state-affiliated media accounts, up to 40.

These statistics align with the promotion of a Chinese state-sponsored virtual event called “A Dialogue on Democracy — What is democracy and who defines it?”. This two-and-a-half-hour virtual panel discussion was hosted by CGTN, a mouthpiece of the Central Propaganda Department of the CCP. The event was broadcast online on December 2 and was heavily promoted by Chinese diplomats and state-sponsored influencers worldwide. More information on this event is provided in its own section below.

Mentions of democracy remained consistent between 80 and 160 mentions per day for the remainder of that week while the Summit for Democracy took place on December 9 and 10, before declining steadily after December 11, following the conclusion of the Summit for Democracy. A few key phrases emerged as the central theme to this campaign: “What kind of #democracy is this?”, “What is #democracy?”, and “who defines #democracy?”

Social media posts, such as the one written by Foreign Ministry spokesperson Wang Wenbin shown in Figure 3, received thousands of engagements across all major social media platforms. Recorded Future is investigating the activities of accounts amplifying this campaign, including bot-like sharing, commenting, and inauthentic behavior. All of China’s prominent spokespersons took part in this campaign, with most activity originating with Hua Chunying, Zhao Lijian, Wang Wenbin, and various Chinese embassy accounts globally. 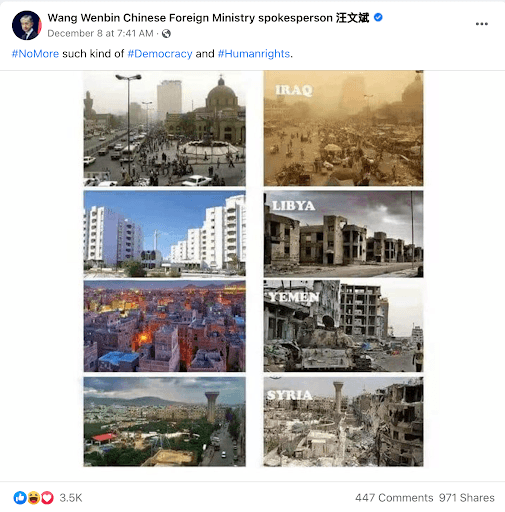 This influence campaign on democracy has been the most comprehensive overt effort that Recorded Future has observed from the Communist Party of China. The campaign embodies the top-down narrative approach, with the highest levels of the Propaganda Department disseminating messaging down to the lowest levels of individual contributors. 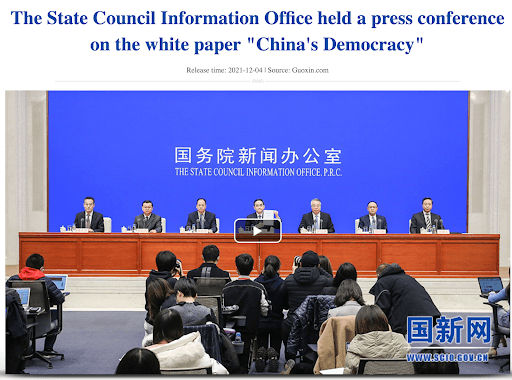 On December 4, 2021, the State Council Information Office (Figure 4), referred to internally as the External Propaganda Office, held a press conference about the release of a white paper called "China’s Democracy". The conference was attended by some of the highest ranking members of China’s propaganda department, an indicator of the importance put on this campaign:

Recorded Future discovered over 8,470 mentions of “what is #democracy?” throughout open sources between December 1 and December 16, 2021. Over 90% of those results originated from China’s propaganda ecosystem, with state-affiliated new agencies contributing the most. The remaining 10% included amplification, discussion, and counterarguments in discussion boards, forums, and comment sections. Additionally, we used the Recorded Future platform to investigate the most common phrases (see Appendix A) used in the campaign and highlighted the most prominent themes during December 2 through December 11, 2021. The highest volume of mentions in open sources happened on December 4, the day the State Council announced its white paper release. When removing the phrase “whole-process people’s democracy” from search results, the highest volume of mentions occurred on December 2, the day of CGTN’s Dialogue on Democracy. 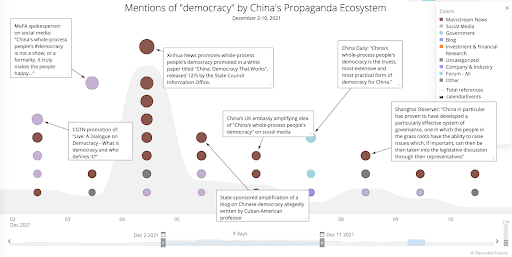 Following the release of the common narrative across all platforms, we observed widespread amplification and support of the narrative in the wider global propaganda landscape. This process involved amplification across all major Chinese news outlets: China Daily, CGTN, Xinhua News, Global Times, and their global affiliates. Each network shared its own links to articles and reports about the topic, including opinion pieces criticizing US democracy, arguing that Western democracies are failing the world, and highlighting nations globally that are allying with China instead of Western democracies. 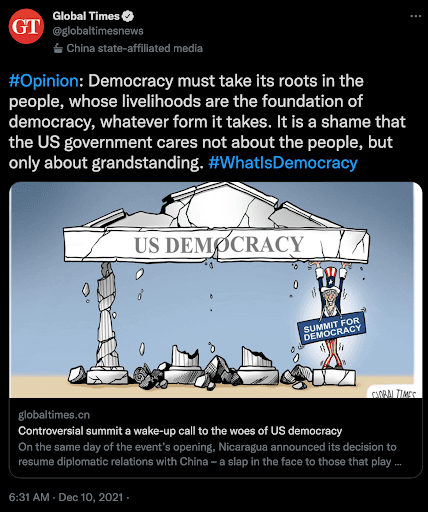 Figure 7: China’s state-affiliated tabloid Global Times promoted an opinion article about the “woes of US democracy” via social media on December 10

“A Dialogue on Democracy”: China’s Attempt at Defining Democracy

On December 2, 2021, one week before the Summit for Democracy hosted by President Joe Biden, China’s state-affiliated media company CGTN, hosted a live virtual panel discussion on YouTube, called “A Dialogue on Democracy — What is democracy and who defines it?”. This virtual summit, hosted by CGTN anchor Wang Guan, was delivered in English from Beijing and featured the following guest panelists: Le Yucheng (Vice Minister of Foreign Affairs of China), Eric Li S.M. (Vice Chairman of China Forum, Center for International Security and Strategy, Tsinghua University), Zhang Weiwei (Director of the China Institute at Fudan University), Kishore Mahbubani (Distinguished Fellow at the Asia Research Institute, National University of Singapore), Martin Jacques (Former Senior Fellow at the Department of Politics and International Studies, Cambridge University), and John Ross (Former Director of Economic and Business Policy for the Mayor of London). 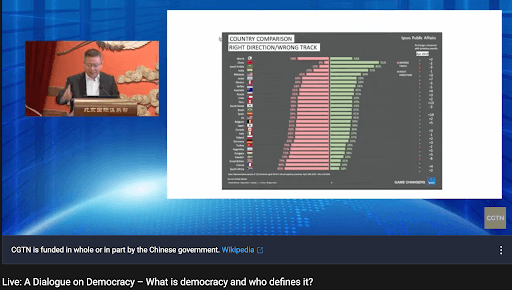 Figure 8: China comparing its approval ratings with the US in the Dialogue on Democracy. Recorded Future found the original source of this chart from a 2017 World Economic Forum presentation of a 2016 (pre-COVID) survey by Ipsos Public Affairs, which queried citizens on their views of their own country, not that of other countries. (Sources: YouTube / World Economic Forum)

"Recently, democracy is being widely discussed around the world. This should have been a good thing. But a very few countries are using democracy as a cover … They even take democracy as a political tour for selfish gains and build small blocks to create division and confrontation in the world. This obviously runs against the spirit of democracy."

In his opening statements, Le also stated the purpose of the dialogue: “Clear up confusion, promote right conceptions, and look for the right way of democracy”. The first question Le posed and answered was, “Is China a democracy or not?”, adding, “Some in the West claim that there seems to be no democracy in China, and that the Communist Party of China is just authoritarian and autocratic”. Le continued, “In their eyes, although China has created many miracles of long-term stability, rapid development, and poverty reduction, and the government has the universal support of the Chinese people, yet China is still a country without democracy and without human rights.”

From the outset of the dialogue, it was clear that the Chinese government was implementing a holistic approach to countering Western criticism of its authoritarian, autocratic governance model, one of the objectives of the US-hosted Summit for Democracy on December 9 and 10. The holistic approach is very similar to the Russian Active Measures playbook and is often referred to as the 4D approach: dismiss, distract, distort, and dismay.

The panel discussion focused on redefining what democracy is and posited that China’s “whole process people’s democracy” is its improved version of socialist democracy for the 21st-century globalized world. Spokespersons for the Chinese government have created countless graphs, charts, images, and explanations for this concept, as illustrated in spokesperson Hua Chunying’s social media posts, one of which is shown in Figure 9: 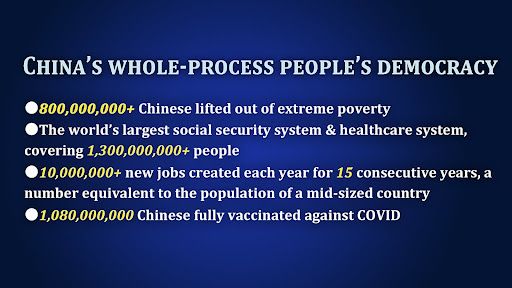 On December 8, the day before President Biden’s Summit For Democracy, CGTN aired another show called “Compared with the West, what is China's whole-process people's democracy?” via YouTube and its own media channels. The program claimed to be an international forum on democracy boasting “more than 500 attendees from over 120 countries and regions and more than 20 international organizations, online and offline.” The topic was “What is the essence of democracy? And how is the Chinese practice of democracy?”, with special emphasis on the opinions of foreign academics and international relations experts on what democracy really is, how the US definition of democracy is limited and often incorrect, and how China is a democracy in its own right. The use of paid foreign experts, which they call “global stringers”, is a tactic that CGTN has adopted over the past year to achieve more “precise communication” to global audiences and build China’s reputation among Western audiences.

Despite widespread amplification of this influence campaign, the individual posts on mainstream social media platforms have received minimal engagement and strong counterarguments against the idea of China being a democracy. The comment sections and sharing activity of the original content appear to be amplified by other accounts within the Chinese propaganda ecosystem and by users in other countries. Recorded Future cannot verify the authenticity of the accounts that are posting support or dissent of this content at this time, but our investigation and monitoring of this campaign continues, which includes attribution and dissemination analysis. For more information on influence and information operations, visit www.recordedfuture.com.

“What kind of democracy is this?”

“What kind of #democracy is this?